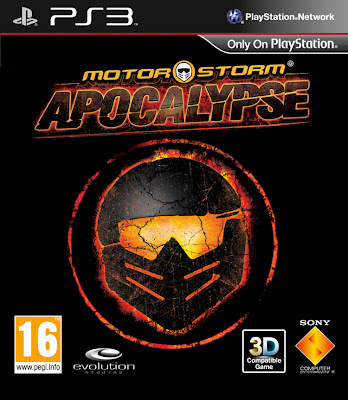 Reviewed by Matt Adcock (A version of this review is also available at Frank The Monkey!:)

AAHhhhhh my butt is on fire!

Welcome to MotorStorm: Apocalypse, the third PS3 game in the MotorStorm franchise which has been tearing up Sony’s powerhouse machine with a uniquely balls out flavour of racing since it launched. ‘Apocalypse’ brings a new level of insane destruction to the mix – the races this time are not just off road, but off the scale awesome as the urban landscape itself is torn apart by a massive earthquake.

Ah yeah, the earthquake, well that didn’t work out so well for the makers as MotorStorm: Apocalypse was due to be released just when the real world earthquake had just hit Japan. So the game was quite rightly delayed for a few weeks to literally "let the dust settle".

So if you’ve played any of the previous MotorStorm games then you’ll know what to expect racing wise – full throttle arcade thrills, where ramming opponents is actively encouraged and boosting over the winning line on fire is part of the experience. Apocalypse recaptures some of the original’s spunky attitude which had been toned down for the last outing, it is also a darker take on the genre with passers-by and spectators fair game to become road kill if they get in the way!?

Anyway - this video shows you exactly what to expect:

The racing dynamics are tight and highly satisfying, boosted by the addition of some wicked new vehicles including supercars, superbikes, hot hatches, muscle cars and choppers. The urban setting makes a refreshing change from the mud, sand (and ice if you count the PSP ‘Artic Edge’) and the feeling of driving a suped up supercar through a dust cloud of pure destruction as the whole track literally collapses around you is a buzz that no other racing game to date has managed to deliver. It dwarves the efforts of Split / Second which was the closest to it in terms of urban racing / destruction and sets a new benchmark for total hard core arcade racing fun.

The MotorStorm Apocalypse city where the ‘Festival’ of racing takes place gets ravaged in real-time as you race - bridges can buckle and twist, buildings collapse and rifts open up beneath the vehicles as they drive, it’s awesome. You can also tinker with the look of your vehicles this time with vinyls, parts, and modified stat changing ‘perks’. It gives you a good affinity with you vehicles and lets you set them up in the style you want to race – combative, pure speed, defensive etc.

MotorStorm fans know just how important using the boost is – and letting it cool down is a key part of winning races. Driving through water is one way to cool / recharge the boost but here you can also let the air cool you down by performing some crazy big air jumps.
The city (or what’s left of it) is still home to some folks – and they can effect the race by doing things like firing missiles onto the track… This interference adds another element to the races and keeps it unpredictable.
You begin as a ‘Rookie’ and can work your way through ‘Pro’ through to ‘Veteran’ – it doesn’t take too long to progress if you’re any good and there are plenty of achievable trophies to grab along the way.
So the Festival is the main single-player mode and has a storyline which is new to the series – told through fun graphic novel like cut scenes. MotorStorm: Apocalypse – of course keeps and improves on the excellent brutal online multiplayer racing too – complete with Call of Duty alike perks to unlock. 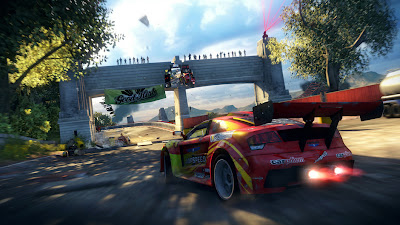 "I feel the need, the need for - oh wait, not that game, this is MOTORSTORM!"
MotorStorm: Apocalypse is a great game which delivers a unique and fun to play racing experience that kicks the ass of any other off road racer on any system. If you like racing games then this is a must buy – don’t deny yourself the sheer excitement that awaits.

If MOTORSTORM APOCALYPSE was a girl it would be recently named by Esquire Magazine 'sexiest woman alive': Katrina Bowden