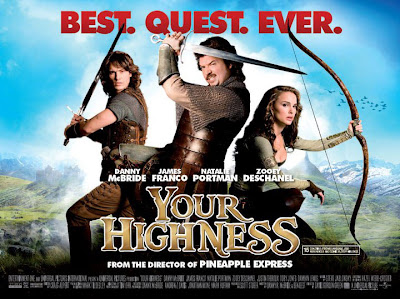 Featuring the mightiest of warriors, the noblest of princess and the comeliest of maidens – together they would overcome impossible odds and treacherous evil to bring truth, justice and peace to the land.


Your Highness is not that film, but it is possibly the funniest slice of fantasy nerd-em-up adventure to hit the screen since Krull or Hawk the Slayer and might even just be the ‘Best. Quest. Ever…’

Director David Gordon Green seems to still be in love with the joys of recreational drugs – following up with last ‘stoner action comedy’ Pineapple Express with what is a very similar format movie just set back in the mists of time. Your Highness boasts such a bawdy, sex obsessed, frankly stupid script that is will either offend the moral pants off you or tickle every dubious funny bone in your body!?

For maximum enjoyment you’ll need to disconnect or pickle your brain before viewing. The screenwriters dredge the comedy barrel whilst spoofing the Lord of the Rings type fantasy films – think ‘Dude Where’s My Sword’ and you’ll have some idea of what to expect.

"Princes to the end..."
The plot such as there is sees co-writer Danny McBride starring as Thadeous – probably the worst Prince ever, a lazy, cowardly fool who is forever in the shadow of his brave, dashing and altogether more heroic elder brother Prince ‘Fabious’ (James Franco). Fabious returns from his latest victory with a new gorgeous fiancé named Belladonna (Zooey Deschanel) but before they can web she is kidnapped by evil warlock Leezar (Justin Theroux).

So the quest is set for the Princes to seek Fabious’ lost bride to be and together face perils such as a pervert ‘wise wizard puppet’, seduction by tribe of bare breasted woman, battle all sorts of enemies including a mutant hand and a Minotaur along the way. The quest is joined by the gorgeous and feisty female warrior Isabel (Natalie Portman) who wears the most iconic metal bikini since Princess Leia and who packs some mad fighting skills.

"Not quite skinny dipping"
The laughs are a bit hit and miss but the cast go about the action with such conviction that it’s hard not to get caught up in the infectious stupidity. Copious fantasy references including Masters of the Universe, Clash of the Titans and Conan, certainly help make up for the weak pot-head and bodily function jokes.
So saddle up brave comedy fantasy seekers and make your quest to view Your Highness…

Laughs öööö – stupid but will make you laugh

Babes öööö – Portman is hot, Deschanel not bad either!

- - -
Second opinion - The Telegraph who were less impressed and say: " It makes Mel Brooks’s Robin Hood: Men in Tights look like a masterpiece." 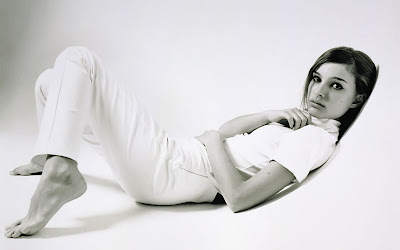 "Natalie Portman - classy actress!"
Posted by Matt Adcock at 1:15 am

Email ThisBlogThis!Share to TwitterShare to FacebookShare to Pinterest
Labels: Your Highness