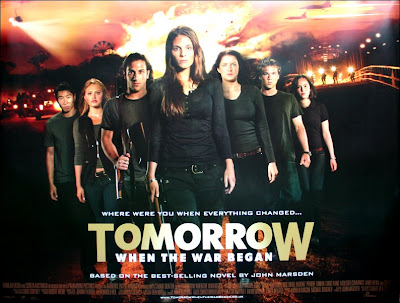 Tomorrow, When The War Began (12a)

G’day sport, you looking for some bonza Aussie action? Well quit your grinnin and drop your linen cos the dinkum Tomorrow, When The War Began is here to blow your mind.

Yep, the massive selling Australian teenage war novel (part one of a seven book series) has been brought to big screen life. Tomorrow, When The War Began is already a bit of a phenomena in Australia where it broke box office records and became 2010’s biggest grossing film down under.

So what’s it all about? Well take seven ‘average’ teenagers namely – Ellie ‘the heroine’ (Caitlin Stasey), Corrie ‘the best friend’ (Rachel Hurd-Wood), Kevin ‘the cowardly boyfriend’ (Lincoln Lewis Holmes), Homer ‘wild boy’ (Deniz Akdeniz), Fiona ‘hot blonde’ (Phoebe Tonkin), Lee ‘token Asian’ (Chris Pang) and Robyn ‘the religious one’ (Ashleigh Cummings). Pack them off into the bush for a weekend camping trip, only for a dastardly evil invading army to take over their hometown of Wirrawee while they’re gone.

"teens check out potential target bridge"
And like any rebellious but good hearted teens – as soon as they realise that their families have been taken captive and that the invaders are using deadly force on the peaceful townsfolk – they vow to fight back in a guerilla style.

Cue lots of sneaking about, soul searching and the occasional exciting firefight or car chase. It’s all put together well enough by debut director Stuart ‘the guy who wrote G.I. Joe: The Rise of Cobra’ Beattie.
This being a film aimed at young adults, I took my 14 year old son Luke with me to give me a teen’s view on the flick. He listed the action scenes, hot babe (Tonkin – who you might know from the mermaid TV show H20) and surprisingly edgy mood as the highlights but was less keen on the “dull” weeping and “boring” long dialogue scenes. Luke’s review score: 7/10 “good but not as good as Battle L.A.” 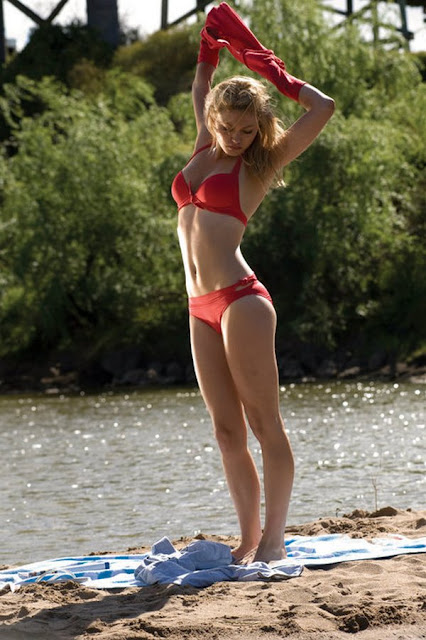 "this was Luke's favourite scene in the film!"
That seems like a fair reaction / summation of Tomorrow, When The War Began which delivers some cool military special effects and works hard to set up the numerous potential sequels which are likely to follow.

As lead character Ellie sums up to her video diary: “We've all had to rewrite the scripts of our lives the last few weeks… it’s been quite a time.”

Worth a look for anyone seeking a mild action hit – as long as you have a high tolerance of cheesy dialogue and ‘Neighbours’ quality acting.


Out of a potential 5 you have to go with a Darkmatters:
ööö1/2

Awesomeness ööö – action is good when it comes

Horror öö – some violence against families

Spiritual Enlightenment ööö – even Christians can take up arms to save their country?
- - -

Second opinion - Total Film who say: "The directorial debut of Stuart Beattie (whose screenwriting credits include the Pirates movies and Australia), this is an impressive-looking film, but unfortunately, handsome production design is its main asset."