This is the heart-warming tale of a bear, a bear in need of human company, of friendship and yes love. It’s a gentle comedy about how the little bear gets into mischief – often with hilarious consequences… Oh wait, this isn’t Paddington, so scratch all that.

This is actually an offensive foul-mouthed comedy sequel from the makers of Family Guy which sees Ted (voiced by Seth MacFarlane who also directs), the furry teddy bear which was magically brought to life, caught up in a legal battle to try and prove that he’s a person.

It’s a weak plot that is basically just an excuse for a torrent of crude, infantile and sweary funny business as Ted and his best pal John (Mark Wahlberg), employ young inexperienced lawyer Samantha L Jackson (Amanda Seyfried) to fight his case.

The reason behind Ted’s odyssey to prove his citizenship is that his marriage to the very human Tami-Lynn (Jessica Barth) is on the rocks and they couple decide that adopting a baby might save their unusual relationship. Adoption being the only route for the couple due to a. Ted not having the necessary anatomical man parts and b. Tami-Lynn’s ovaries being non functioning due to her excessive drug use…

Ah drug use. Ted 2 is a veritable ode to smoking weed, almost all the characters partake, often and graphically, it feels like there’s bong action in 90% of the scenes – so if you’re not looking for a stoner fantasy you might want to move along. 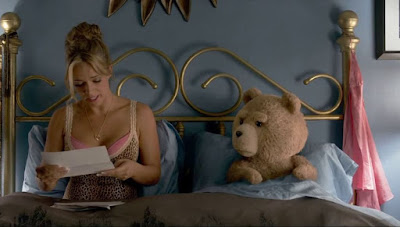 Ted himself is still the star of the show though and has been brought to life once again using some CGI genius which is up there with his more family friendly movie bear brethren Paddington.

Joke wise it’s MacFarlane’s usual shtick of ‘throw lots of potential funnies at the screen and hope that at least some of them work’ and alas this time round less of them do. But having said that there are some AAA cameos that boost the fun factor such as Liam Neeson in his ‘Taken’ persona and Morgan Freeman as a bigwig civil rights lawyer. Original Flash Gordon (Sam J. Jones) makes a return appearance too. 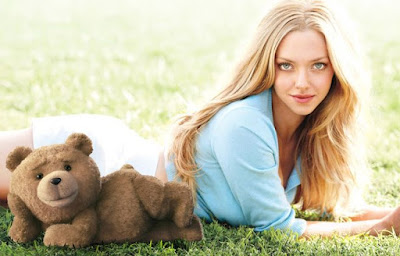 As per the original, Ted is a furry subversive blast of very bad taste humour whose appeal may be restricTED to those with broad minds – but if you’re a fan then the chance to hang out with Ted again shouldn’t be sniffed at.

Read the Darkmatters review of the original TED: click here