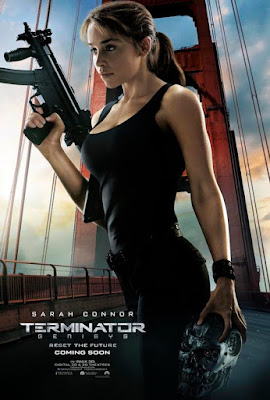 In the future, sentient machines will attempt to wipe out all humans. Mankind however rallies around a brilliant leader named John Connor (Jason Clarke) and get to the point of destroying the machine control system called Skynet, thus ending the war. But the sneaky machines send a terminator back in time to kill John's mother, Sarah Connor (Emilia Clarke), before she can have John, thus pre-emptively taking the win for the machines before the fighting even begins. Stop me if this sounds at all familiar…

Terminator Genisys attempts a hard reboot of the franchise, which really hasn’t been great since Terminator 2: Judgement Day. Director Alan ‘Thor: The Dark World’ Taylor uses some novel ideas in order to try and breathe new life into the decaying exoskeleton of the Terminator films and initially it pays off.

First up Genisys reuses not just the characters but also the actual locations, lines, scenes and pretty much everything cool about the first two Terminator films and for about 20 minutes it works! Fans will get a sweet nostalgic buzz seeing Arnie retracing his steps – only to be met with a few surprise twists, but after this promising start Genisys manages to go spectacularly wrong.

The plot disappears into mumbo jumbo, the actors – especially Jai Courtney who plays the new Kyle Reese, the brave freedom fighter sent back to protect Sarah Connor, seem to be intent on showing us just how much better the originals were in the same roles. Then the action kicks into CGI meltdown leaving viewers in a state of ‘meh’ as their eyeballs are assaulted with limited thrill scenes of 12a friendly moderate violence. 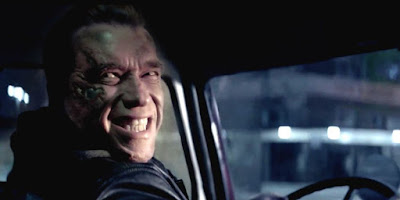 "how much did they pay you for this Arnie?"

Alas Terminator Genisys feels like a huge waste of time and effort by all concerned – it’s a shame because I’m a big fan of the Terminator concept and it pains me to see even the stoic Arnie struggling to recapture the coolness of his most iconic role.

So apart from the opening reworking of the original, is there anything of merit here? Well the special effects are top notch in places, and the machines in the future world where they have taken control look great – but these scenes are few and far between.

It really doesn’t help that anyone who has seen the trailer will already know the big ‘surprise’ plot twist. And whilst the direction isn’t terrible, the writers of this ill thought through nonsense need to be terminated ASAP.

Awesomeness ööö – moments of joyous nostalgic joy at the start

Laughs öö – tries too hard to be funny but fails

"the death of a franchise?"