“We boarded the Avalon with the destination a hundred and twenty years hibernation means you wake up in a new century, on a new planet, but a year ago everything changed.”

Space – the final frontier for big budget romance films apparently. Now though we have the strapping Jim Preston (Chris 'Guardians of the Galaxy' Pratt) and gorgeous Aurora Lane (Jennifer 'Joy'  Lawrence) daring to go where no epic sci-fi has gone as literally star-crossed lovers on an intergalactic voyage of luuurve.

"Nice spaceship - shame about the action"

It’s not quite what you think though as Preston finds himself awoken from his planned 120 year hyper-sleep after just 30 years – and with no capacity to go back under, is staring at living out his remaining years alone in space (all the crew and other passengers are still blissfully asleep). All Preston has for company are serving / cleaning robots, and an android named Arthur (Michael 'Nocturnal Animals' Sheen) who tends a Shining-esque bar.

But even a cursory glance at the trailer or poster will alert you to the fact that Lane – the woman of his dreams – is on board and despite that in doing so he’s condemning her grow old and die with him – he reads all about her, noting everything that she likes in an advance pre-stalking move and then wakes her up…

The two of them then fall for each other despite his dark secret of having basically hand picked her and manipulated her fate to be his mate. Lawrence and Pratt however do make an extremely handsome couple though and each gets to spend obligatory time in their skimpys in case we were in any doubt of their loveliness. 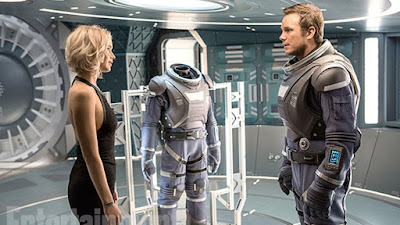 To break up the creepy ‘arranged’ space cohabitation there are at least some intergalactic peril scenes – pick of the bunch being a jaw dropping loss of gravity whilst Lawrence is swimming. It seems that the spaceship might be going wrong – hhhmmm, I wonder if Preston being an Engineer is going to come in handy? Alas though the plot doesn’t do anything very surprising despite the android holding the possible power to let Lane know about her non accidental awakening and Laurence Fishburne popping up for a short plot device mechanic.

In the end director Morten ‘The Intimidation Game’ Tyldum makes Passengers a good looking, slick piece of romantic drama beyond the stars which is only really worth checking due to the star power of the two leads. If you can get over the uncomfortable plotline, an enjoyable ‘lust in space’ riff on a high-tech desert island awaits. 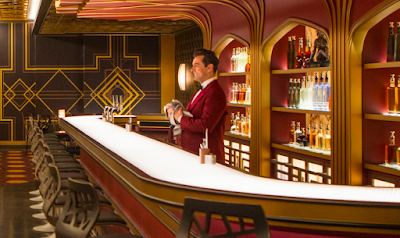 Laughs öö – Some but could have done with more