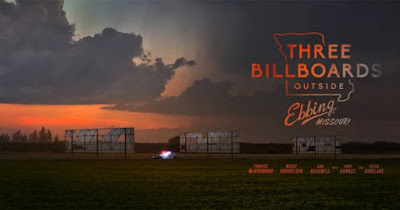 Read the extended CVM version of this review: CVM BLOG

Not much can prepare you for this brutally dark comic drama from Academy Award nominee Martin ‘In Bruges’ McDonagh. The harrowing story is set some months after the horrific rape and murder of a young woman called Angela Hayes (Kathryn Newton). The police have made no progress in finding a suspect so Angela’s mother Mildred (Academy Award winner – and surely potentially in line for another for her stunning performance here - Frances McDormand) commissions three billboard signs leading into her town with a controversial message calling out William Willoughby (Woody Harrelson), the town's revered chief of police.

What follows is a battle of wills between Mildred and Ebbing's law enforcement, with the townsfolk’s emotions running high. As anger, bigotry and violence come to the surface, the lives of everyone are impacted.

Joining Mildred on her heartfelt quest for justice is a wildly unpredictable ride, one moment you’ll be rocked by the gut-churning raw grief and recriminations, the next marvelling at some wonderful laugh-out-loud dialogue. It’s a killer combo of superb acting and incredible cinematography that elevates Three Billboards to a classic status.

"Woman on a mission"

McDormand gives a master class in how loss and grief can embitter the human soul, this is an insight into the long uneasy road towards finding any sort of peace. The mix of dark and comedic tones is a tricky balancing act but director McDonagh nails it without sacrificing either element.

The entire cast are excellent but the stand out supporting role is Sam Rockwell as Dixon, a flawed, racist cop whose volatile, childish behaviour is a danger to everyone around him. Rockwell takes his unlikable character on a tremendous arc of development, which will challenge you about how everyone should have a chance at redemption. Woody Harrelson, Peter Dinklage, John Hawk and Caleb Landry Jones are also great though.

Ultimately the central message is that even deeply wounded people can find a reason to live, a purpose and to not only transcend themselves, but walk a path to redemption.

Three Billboards Outside Ebbing, Missouri is a masterpiece – a film that will scorch your soul and challenge you but also leave you thinking through how you approach those around you and just maybe make you a better person as a result.

(5 - Everyone has their demons)