Read this review over at Luton News

“Sometimes I envy the finality of death. The certainty. And I have to drive those thoughts away when I wake.”

Heavy duty hatred, redemption and everything in between are here in post civil war frontier America where Captain Joseph Blocker (Christian Bale), a troubled soldier is given a thankless mission which will change his life…

"don't mess"
After a lifetime of killing and fighting the native Americans, he is ordered to escort one of his sworn enemies, Cheyenne Chief Yellow Hawk (Wes Studi) and his family back to his homeland in Montana because he’s dying of cancer.

Hostiles tells the tale of the party’s journey – the fraught relationship between Blocker and his captive is the main focus but there are many encounters along the way. They are hunted by bloodthirsty Comanches, given an untrustworthy US prisoner to take with them in the shifty form of Sgt. Charles Wills (Ben Foster) and find a broken widow whose family has been massacred. 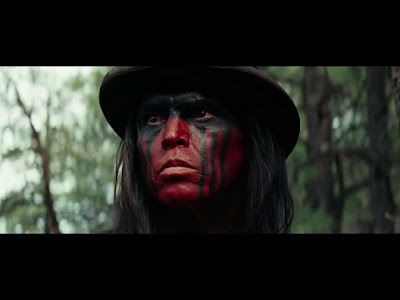 Rosamund Pike's Mrs. Quaid is a fantastic study in grief and grit, she clings to Blocker as her protector and their uneasy relationship is both touching and shot through with vulnerability. The acting is excellent throughout and the storytelling gives each character space to develop and through their interactions and challenges to the point that when the body count rises you really care who makes it.

As a ‘Western’ Hostiles is incredibly relevant in dealing with the darkness in men’s hearts and is a fascinating study of how hatred and prejudice can be grappled with and maybe even eventually overcome. Seeing the actions of those who think their cause is righteous can lead to suffering for those they meet, whilst ugliness and beauty, courage and redemption permeate the battles and struggles that each face. 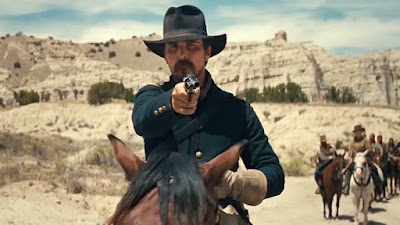 The cinematography by Masanobu Takayanagi is superb and emotive, capturing the intensity of the situations and delivering some truly awe-inspiring landscapes and vistas. Hostiles is a film that will move you and touch your soul.

Director Scott ‘Black Mass’ Cooper serves up plenty to of troubles for the characters to deal with – even those who have a faith – as Blocker says at one point "God’s been blind to what's been going on here for a long time." 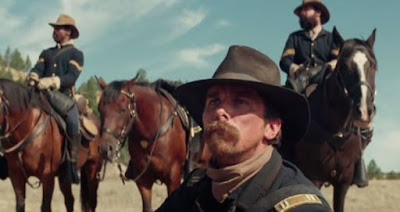 You don’t need to be a Western fan to find much to enjoy in Hostiles, it’s bleak and brutal for sure but also offers a glimpse of a possible tonic as we struggle with the injustice and hatred which still haunts our world today.

(4.5 - No redemption without sacrifice)

Awesomeness öööö  – Staggering scenes that will haunt you