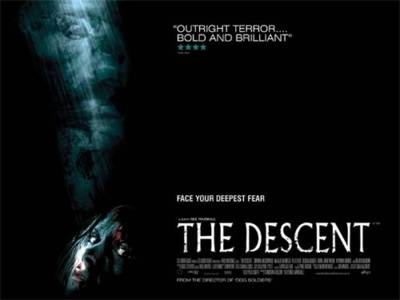 Prepare yourself… The Descent is the hardest, goriest and altogether nastiest British horror film for years – it’s also the best. You could describe it as ‘Six psycho chicks with picks vs hundreds of carnivorous cave mutants’ but that doesn’t do it justice as this is one of those rare horror films where you get enough character build up to actually empathise with the plucky heroines. Just don’t get too attached to these well-rounded females because The Descent is not kind to its protagonists and I guarantee that you’ll cringe, wince and maybe even shout “Arrgghhh that’s got to hurt!” if you’re brave enough to tackle this tale. If you’re looking for survival against the odds mixed with large doses of the sort of girly posturing / bitching that only an all woman cast can deliver – like a serious PMT overload right there on the screen (and that’s a truly terrifying thought for males everywhere!) then you’ve come to the right place.
Director Neil Marshall builds a solid story set up from the start – and the jumps come even before the 6 females decide to ‘go underground’. Once in the darkness of the caves (point to note: do not watch this film if you ever plan to go potholing or cave exploring in the future) the tension amps up to an almost unbearable level. I don’t think I’ve ever felt so claustrophobic watching a film and it had nothing to do with my mate Matt Landsman screaming like a girl beside me – actually it wasn’t him screaming – it was everybody in the cinema, but special credit to the woman behind us who made the whole experience into one of ‘Dolby surround sound screaming’…
The Descent is a clever title too because whilst it aptly describes the action of descending into the darkness – it also refers to the mental state of the women – especially hardass Juno (Natalie Jackson Mendoza) who’s past sins come to influence her actions and she is not the sort of pal you want to have stalking you with a climbing axe!
So, obviously The Descent is not a film for everyone and if you like nice happy films where people generally don’t get axes through the throat or their insides ripped out whilst still alive – you’d do best to avoid this because otherwise you’ll be traumatised for life… But for those who like to see human nature pushed beyond breaking point and for everyone who enjoyed tense monster films like Alien… The Descent should be your next destination.

Darkmatt Rating: öööö (another good reason to be afraid of the dark) 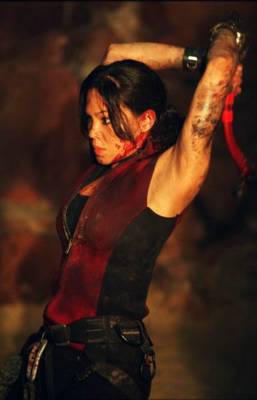 Nice review, you really do have a knack for this kind of writing, keep it up.

Being a horror writer myself, I tend to be always on the seach for a good horror/thriller and will definitely check this one out.

I just saw this last night and I absolutely loved it. It's scary, bloody and completely satisfying. It's great to see that the well made genre film is still alive and kicking. By the way, I caught the British version of this so I didn't have be insulted with the watered down American ending.