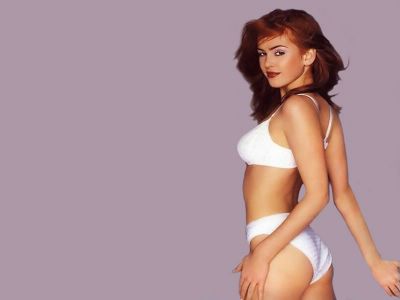 "Isla shows she looks good even when someone seems to have nicked her clothes..."

Matt Adcock meets Isla Fisher … oh and Vince Vaughn and Owen Wilson crash the interview…
How would you feel if someone crashed your wedding?

Owen: Hey, it depends on the person. If some of the people seated here were to crash my wedding - and they would have to crash, as they wouldn't be invited - I'd probably let bygones be bygones and welcome them.


Isla, did you enjoy playing the ‘sexy but unstable’ Gloria?

Isla: “Sure, she’s young and impressionable – and he’s a real ladies man who woos her. Gloria is swept off her feet and becomes very much a woman obsessed… She’s a bit like a spoiled kid with a new toy who just wants to snap its head off!”


Oohh Kay… So Vince have you ever had a date as scary as Isla’s character in this movie?
Vince: Nothing comparable to that, no! But it was a lot of fun for me because Isla is very funny and also a good actress, so it was nice to go and do a scene and by default to be the one who's reacting to stuff.

Isla, can I just say that you look into total control of the more err, ‘risqué’ scenes your character has. And erm, was that ‘all you’ that we saw?

Isla: “Vince and I both had body doubles for the dinner table scene and I had one for the tying up scene. But it was definitely daunting.”

Vince: “We originally didn't have a body double for the dinner table scene. David had a thing that we put in that didn't quite work out.”


So, as potential ‘Mrs Ali G’, how highly do you rate a sense of humour on a man that you might be attracted to?


Right, yes… How was working with Owen Wilson?

Vince: “Hey Owen Wilson is a big dollar sign!! When I look at this guy all I see is a dollar sign… I said, ‘Owen, here's how it's going to work, amigo: I'm gonna say something stupid, you're gonna roll your eyes, step on your toe and the guy in the glasses is gonna yell cut.’”
You seemed to like the all singing all dancing elements of Wedding Crashers - might there be a musical in the works for you?
Vince: Thank you for asking. There is a musical that Owen and I are actually working on right now. We play two rodeo clowns who leave the rodeo and become lifeguards at a park district pool outside of Chicago where we befriend a young Filipino boy who has an outie belly button and we teach him what it's like to get along with the other kids that summer. It's called Mr Sunshine and Owen plays Mr Sunshine.

Do you have favourites of the characters you play in different movies?

Vince: Owen, can we see him, does Hutch want to come out right now?
Owen: I'm a little shy. The little Filipino boy in Mr Sunshine.
Vince: Is Hutch there, does he want to come out and talk to everyone?
Owen: Hutch is very shy right now. Probably my favourite movie would be the first movie I worked on because that was the one that was the hardest to get made and it test screened worse than any movie in Sony's history and stuff. So that was the most important one too.
Matt's review of Wedding Crashers
Posted by Matt Adcock at 8:27 pm