Is the bible sexist? 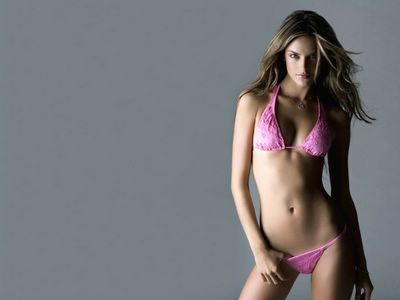 "see below as Matt tries to justify 'tasteful' photos like this on his blog..."


Is the bible sexist or is it just me?

One of Matt's occasional blog ponderings prompted by a conversation...

Being a Christian film reviewer can be hard, on the one hand you have the whole Old Testament which depicts pretty much a totally patriarchal society.
By modern value systems, you’d have to call it a ‘sexist’ way of life.
I guess at least they didn’t have blogs back then - where they could post pictures of impossibly gorgeous women on for no other reason than the blog owner found them ‘pleasing to the eye’… As above...
Is it so wrong? Does that make me a sexist git? I mean some of those ‘great’ servants of God had like King David certainly had time for the ladies (his eight wives, in case you were wondering were: Michal, a daughter of King Saul. Ahinoam of Jezreel. Abigail, previously wife of Nabal. Then Maachah, Haggith, Avital, Eglah and Bathsheba.)
Obviously I’m happily married and hope to grow old with one and only stunning supermodel wife but I seek a healthy spiritual balance… Especially because I am fascinated with films and reviewing them for a hobby means that I do get to see so many gorgeous females on screen… Is window shopping wrong, especially when you have no intention to buy?
Anyway, back to the topic at hand, some guy today told me that the Bible is not sexist overall because it records all kinds of sin; slavery and bondage and the failures of its greatest heroes (like David again for his adultery with Bathsheba, and his subsequent murder of her husband to try and get away with it), yet it also gives us the answer and the cure for sin. You know redemption through Christ... and all that.
I’d have to add that the New Testament where Jesus gets to put his views across it is much more empowering to both sexes. So go and debate it for yourself…

And in an almost connected conclusion I’ll just recommend a click over to my friend Tom’s blog:
http://tomwade.blogspot.com/ where his write up of ‘In Her Shoes’ includes the poignant line: “Cameron Diaz walking around with hardly any clothes on for the whole film – hang on – suddenly this movie doesn’t seem that bad at all…”
Here endeth the lesson – I’m off to watch Bullet Boy.
Reviews and other stuff you might want to read indexed here
Posted by Matt Adcock at 8:03 pm

I think the term 'sexist' is a 20th century invention and it retroactively being applied to all sorts of texts. I believe that all works, including our blogs, will be judged later on by others and they will find something "ist" in it. The Bible is a product of its own times, the writers could not have known they were committing a 20th century "crime" back then.

But feminists have found ways to reinterpret the Bible, like using Aramaic context and culture which is not apparent in the translations that we have now (like the term 'Adama' for Adam which was not really masculine as we know it today but a general name for a person).

BTW, I've already added you to my links. Good day!!!

personally i dont see anything sexist in looking at (or posting) a picture of a girl in a bikini, but thats possibly because i happen to be a hetro mail, who since he got married see's a lot less girls in bikinis than he used to.

i guess its like the good and bad thing, its not always about how far left or right you stand on the line, sometimes its which direction your facing that counts, ie its your intentions that matter, And as you freely admit your reasons and motivation, whats the problem.

You could also look at it as a public service, im not to proud to admit that i never would have got round to going to see sin city if you handt posted that pic of jessica alba a while back ;-)

wow Noel Y. Bava, thats a rather intellectual response! I was simply going to say that i see no problem with what your doing Matt - the pictures you post are the only chance i get to see scantily clad people of the female kind... and your brilliant thoughts and film reviews compliment them perfectly...