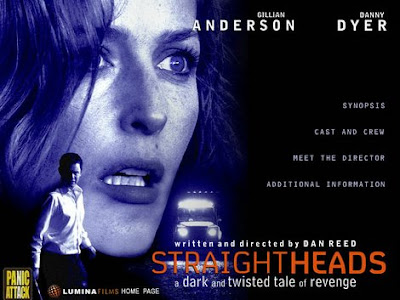 Welcome dearly beloved, as it sayeth in Deuteronomy ‘…thine eye shall not pity; but life shall go for life, eye for eye, tooth for tooth, hand for hand, foot for foot...’ so must newbie director Dan Reed have read and takeneth to his heart and pondered these things.
Then Reed didst write and direct Straightheads a movie much filled with sickening physical violence, some almost engaging erotiscism, some more violence – this of a sexual nature, some ill considered comedy moments (these may yet prove to be unintentional) and a well worn ‘revenge’ plot… He did maketh this movie with the talented and rather lovely Gillian Anderson of X-Files acclaim and partner her with cool young Brit wide boy supernova Danny ‘you calling me a C888?’ Dyer. And low it make lots of movie goers quite excited at the thought of this 18 rated dark and disturbing tale of ‘normal’ people (she’s well off, he likes a bit of dope) getting in touch with their primal beast natures in order to visit vengeance of great fury upon evil redneck scumbags. Some did contemplate a ‘Straw Dogs’ for the new millennium, others looked to Straightheads being a slicker and generally not as scrappily crafted update along the lines of ‘I Spit On Your Grave’ – no one could have predicted quite what the end result would be, until now…
For low, Verve Pictures have seen the glory and are releasing Straightheads in the UK in April and thus in anticipation of that day, this is my testament having witnessed the entire 79mins as to whether the film succeeds or instead manages to sully the already pretty badly sullied name of revenge horror films…

I left the screening not quite knowing what to make of Straightheads. It is certainly a confident debut by Reed, he manages to bring a very right here, right now ambiance to the movie and if you’re a fan of Dyer or Anderson then you’ll undoubtedly enjoy at least parts of the proceedings. The initial set up – boy installs security system in rich bird’s apartment, she thinks he’s cute and asks him to accompany her to a glamorous work ‘do’ where they get saucy with each other and share some genuine feeling repartee sucks you in nicely. But you must already know this is not a standard romance and before you can ask “who’s the rapist nutter in the Land Rover?” the two lovebirds are being assaulted and beaten to a pulp and left for dead.
A chronic lack of Police competency coupled with a plot boosting coincidental crossing of paths leave the way open for a revenge of the Straightheads set up which they duly deliver… In eye watering style too – I’m guessing that it’s not every day that you see a man taking an anal enema featuring the long barrel of a sniper’s rifle complete with sight!?
The main problem with Straightheads though is that it struggles to maintain its tone, veering from grim, disturbing and bleak (which is how it should play out to do a nasty tale like this well) to badly comic (this might be either because Dan Reed is much sicker puppy than anyone suspects or that Danny Dyer just can’t help but be a bit of a laugh – which worked really well in Severance, but spoils the atmosphere here).

Overall, if you’re looking for a new Brit violence related horror, you should see this ASAP because it delivers enough grimness to satisfy. Another reason you might want to check it is because Anderson gets naked – and in style - Scully fans out there please stop drooling!!
Also if you’re following Dyer’s acting career and have enjoyed films like Football Factory, The Business and Severance – Straightheads will deliver enough of his geezer-ish charm to entertain.

For those simply looking for a coherent and thought provoking study about violence and revenge, this might not quite hit the mark because the characters are only marginally sketched out and the ‘bad guy was forced into his diabolical actions’ twist isn’t very convincing.

Reed might yet be a talent to watch but I’m pretty sure that Nick Love’s Danny Dyer starring film OUTLAW which hits UK in March will be better than this.

Action ööö - delivers just about enough
Laughs ööö – more than expected, but that's not a good thing!?
Horror öööö – some scenes will make you wince!
Babes öööö – Anderson, you still so would...

My review of Severance (over at TheFilmAsylum)

This page is fantastic, what you show us is very interesting and important, do you want to see something more? Look: Great investment opportunity in Costa Rica: jaco beach resort, best western hotel jaco beach, map jaco beach costa rica. Visit us for more info at: http://www.jaco-bay.com/

good review of Straightheads which i enjoyed reading. i just saw the film and googled it - didn't know quite what to make of it though. very odd film but as you say does have a sense of immediacy to it. i think many of the reviews ie the Guardian (god i can't stand film critics sometimes!)in thier usual pompous way have dismissed it out of hand actually. its not that bad at all really in that it does what it says on the tin and I think Anderson does a pretty good job as does her co star (whatever his name is). i thought the cryptic stuff about her job and her boss was a bit underhanded though ie i thought that something might have been at work here you know was it somekind of set up etc. but nothing came of that.

Your blog is really good , you have interesting information , is really good written. Congratulation!!!. Do you want to see something more? Read it...Zeta Group, Great investment opportunity in Costa Rica: jaco bay. Visit us for more info at: http://www.zetaonline.com.