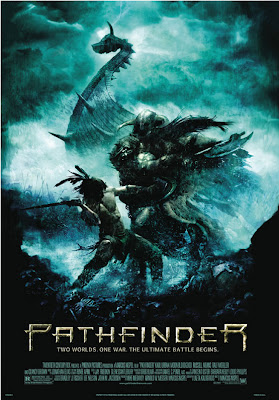 If you love exciting action movies that feature heavy-duty battles, heroic against the odds bravery and cool mist shrouded visuals then you’d probably be keen to witness Pathfinder… Unfortunately this blood soaked wannabe battle epic of Vikings versus Native Americans delivers nothing but crushing disappointment so don’t get your hopes up!
It starts well enough and certainly gives a good revisiting of Norse warriors pillaging and slaughtering all who they come across. But before you can say ‘why is all so muddled and dark?’ the action degenerates into a muddled dark mess and the plot loses its way (which is a bit ironic given the name of the film).
When the lights came up after 99 minutes of frankly dull Viking bashing antics my friend Ian and I were left shaking our heads and wondering how such a cool concept had managed to be so weak. It isn’t the fault of Karl ‘Eomer from Lord of the Rings’ Urban who plays the hero; an abandoned Viking child brought up as one of their own by the American Natives who call him ‘Ghost’ due to his pale skin. If you could tell what the hell he’s doing it’s entirely possible that Ghost could have been a big screen hero of note. Alas though even when taking on huge bloodthirsty Viking warlords, the combination of too tight camera angles, murky blue/grey film tint and ever present mist mean that you don’t get any chance to be impressed – in fact the fight scenes in Pathfinder are criminally unexciting as a result.
I’ve witnessed more raw emotion and crunching Viking violence playing the chess like board game Hnefatafl, also known as The Viking Game… Nothing in this film is more than average and the risible script is likely to win the ‘most leaden and altogether gibberish dialogue in a movie’ Oscar should they decide to award one…
I don’t think you’re supposed to feel sorry for the monstrous Norse invaders who look like the supporting act from a Korn gig but it’s hard not to when they get little more to do than glare at the camera and die stupidly. The awesome ‘300’ managed to show that superficial but visually wondrous battles can be excellent entertainment, Pathfinder however demonstrates that slow-motion mud drenched gory close-ups are just dull.
Let’s hope this fumble of a movie is a one off and that director Nispel can redeem himself with his next project - a dark reworking of Alice in Wonderland.

Action ööö – there might even be more but you can't really tell
Laughs öö – yeah, at the script
Horror ööö – nasty in places
Babes ö – Pocahontas doesn't really do it for me 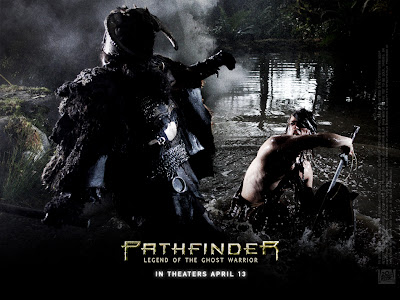 "this might be exciting if you could see what was going on!!"