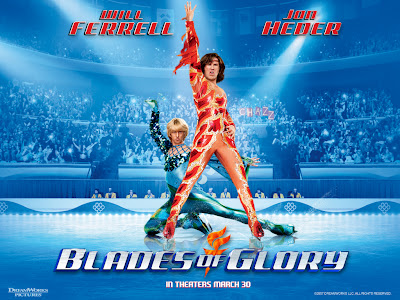 An expectant hush falls as the skaters take to the ice, the results of their years of hard training are about to be presented – everything rests on the next few minutes, can they bring home glory or are they destined to fail in front of millions?Blades of Glory starts well, there’s a good triple axle of funny back-stories involving a blonde orphan who was born to skate and looks a lot like my mate Tom, this Jimmy MacElroy (played by Jon ‘Napoleon Dynamite’ Heder) is an effeminate skating prodigy who loves the sequins and figure hugging outfits. He’s up against the red blooded, sex addicted ‘Tsunami of Swagger’ Chazz Michael Michaels embodied by Will Ferrell who prides himself in taking ice based pelvic thrusting to previously unexplored levels. Things get messy when both are handed lifetime bans from the sport following a joint gold medal-wining stand off which ends in the rivals shamefully brawling on the ice.
A few harsh years in the wilderness i.e. with no competitive skating leaves them broken and even dents the faith of MacElroy’s scene stealing stalker Hector (Nick Swardson). Then an unexpected bolt from the blue sees the two rivals thrown a skating lifeline in a loophole which will allow them to compete again – as partners - the first national level boy / boy ice dancing duo.
Cue every ‘crotch to face’ joke you can think of as the macho and over sexed Michaels is forced to dance with MacElroy, the shockwaves sent out from their joint lycra clad entrance even causes the professional commentator to remark: "As if skating isn’t gay enough?"
Throw in a comedy decapitation, some impressively comic ice-dance routines and plenty of very funny dialogue like when the two rivals meet again after their enforced break and MacElroy says: “I see you got fat!” Michaels replies: “I see you still look like a 15-year-old girl - but not hot!”
Blades of Glory takes a solid 5.8 (out of 6) from the judges due to its eagerness to make the audience laugh. Yes it’s seriously stupid stuff but sometimes that can be just the ticket for anyone seeking fun night out and the whole cast certainly go at the lightweight material with unrestrained gusto. The pals I saw this with laughed loud and long – so it’s safe to report that Blades of Glory achieves its mission to entertain.

I saw this film on Thursday and didnt even plan it because I was watching The Lives of Others but wouldnt want to wait for 2 hours not doing anything so I half-heartedly went in and was so glad that I did.

Did you like the Flash Gordon sequence? I thought it was a hoot!!!