The Hills Have Eyes 2 - review 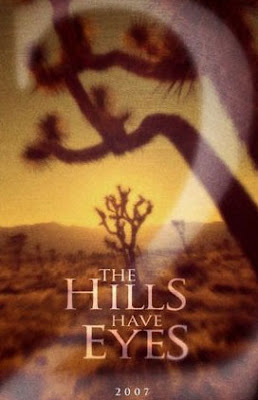 Gang of mutant hillbillies – check
Unfeasibly good looking squad of trainee U.S. Marines – check
This can mean only one thing… A squelchy sequel to last year's remake of Wes Craven's 1977 exploitation classic has been found crawling into cinemas. It ignores the original movies’ sequel and replaces it with a ‘marines versus cannibals’ second rate version of ALIENS…

This is basically the whimsical and genteel tale of a search and exercise in New Mexico's Section 16 (you know, the one where nuclear testing produced a freakish mutant family who like nothing better then hunting, killing and eating anyone who crosses their path). It’s not remotely whimsical or genteel – in fact The Hills Have Eyes 2 is a brutal gut punch of primal fear and crunching violence, backed up with copious gore and some very unpleasant rape scenes… Quite why you’d want to watch this sort of thing for fun is a point for debate with your psychologist alone – but if limb severing, intestine spilling, brain bashing action is what you’ve a hankering for, this delivers buckets of slightly stale smelling blood.

I’d be lying if I told you that this is an admirable piece of cinema, The Hills Have Eyes 2 takes what could have been a cool fight to the death plotline and wastes it with pointless ‘pick em off one by one’ by the numbers – seen it a million times before - effort. The only good thing about it is new hottie Jessica Stroup (a model who looks laughably out of place in combat fatigues) – she lights up the screen and should find better films to show off her cute ass in, in future… But even she isn't as hot as last year's eye candy (Emile De Raven).
Last year Alexandre Aja did a decent job of remaking the original Hills Have Eyes but his efforts are wasted and watered down by this poor follow up.
The Lucky ones die fast – unfortunately the audience are not so lucky… If by some miracle they decide to knock out another decomposing animated corpse sequel – they would do well to just pretend that this one never happened… Average horror films are legion and this is just another severed head to toss on the pile…

Overall öö (hardly worth the effort) 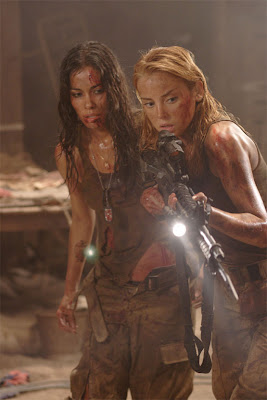 "you know of course, blondes like me are much too cute to suffer too much... you brunettes though - you're in for a very bad time!!" 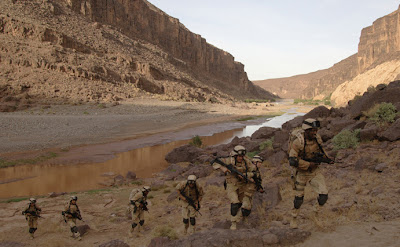 "line up - that's right, we're ready to be picked off from left to right!"