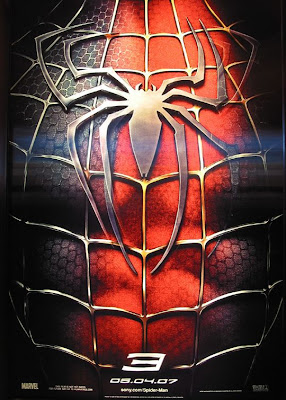 Spider sense tingling… something cool has arrived… something that is going to make comic book fans very very happy…
Yes Spiderman is back back back and this time he’s in for treble trouble. Facing off against three dangerous enemies, struggling to balance his love life and cope with the malignant effects of a cool new black suit, which brings out his darkest impulses.
What this adds up to is over two hours of high velocity web-slinging action, heart breaking emotion and tragedy and even some wicked humour – all in all quite possibly the best comic book movie yet.
Director Sam Raimi returns and maintains the pleasing character-driven narrative from the first two films, if you’ve seen either then this one immediately feels right and you can jump right into the action. This time however the tension is ratcheted up to new heights thanks to Spidey having to face so many new challenges. As Peter Parker, Toby Maguire is still trying to make it work with his childhood sweetheart Mary-Jane (the delicious Kirsten Dunst) – can they make to happily ever after? But as his alter Spider-empowered ego he is busy riding a wave of public affection, wrapped up in himself to the point that he is in danger of alienating the woman he cares most about.
Of course every super-hero needs his quota of super villains and Spider-Man 3 has some of the best – first up is Harry Osborn (James Franco) back as the New Goblin, still looking to avenge his father’s death. Then there’s Flint Marko (Thomas Haden Church) who also goes by the name ‘Sandman’ – owing to the fact that he is literally made of sand. Finally there is fan boy favourite Venom (Topher Grace) – a fanged dark spider space symbiotic suit that wreaks all manner of nastiness. Speaking of which, Spider-Man 3 doesn’t actually get too grim which allows for a wide viewing audience but does mean that Venom has to pull his punches somewhat.
This is by far the funniest of the 3 Spider films too with several seriously comedic scenes – pick of which is an awesome Bruce Campbell cameo as a completely over the top Maître d’…
Everything about Spider-Man 3 is really top notch – the cast are great, the special effects redefine what it is possible to realise on screen and the comic book action kicks butt.
This could be the end of Spider-Man – but let’s hope not!!

Overall öööö1/2 (Spiderman set to rule the Summer of '07) 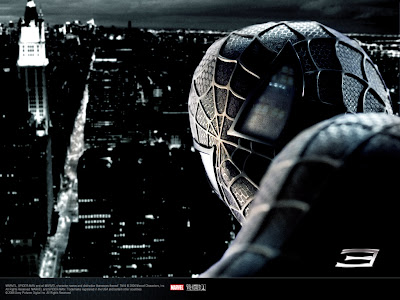 "everyone looks good in black..."

As many Venom's fans, how could I avoid a dissapointing for viewing how Sam Raimi delivers only 20 minutes with Venom.

He use to be the greatest spiderman foe, after raimi, Venom is just a second hand villian

thought you could do with this

Finally someone else that liked this films .. & I like your rating system, will probably have to steal (i mean make tsomething inspired by) it ..