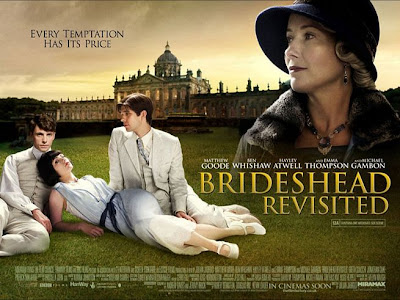 Nobody does the lives and loves of posh totty quite like Evelyn Waugh in his various classic books and in Brideshead Revisited we have a poignant story of forbidden love and lost innocence set in England prior to the Second World War. I grew up watching the 1980’s TV series version starring Laurence Olivier,Diana Quick and Jeremy Irons on BBC One, ah those blissful languid days enjoying a taste of juicy unattainable upper class love…

But now Julian ‘Becoming Jane’ Jarrold has remade the tale for the big screen and a whole new audience have the chance to get acquainted with middle-class Charles Ryder (Matthew ‘The Lookout’ Goode) and marvel at his love triangle with brother and sister Sebastian (Ben Whishaw) and Julia (Hayley ‘The Duchess’ Atwell) Flyte… There’s much drinking, smoking and feasting amongst the gleaming spires of Oxford and then at the wonderful Brideshead Estate – almost as if that’s all the upper class have to fill their time with – plus the occasional jaunt to Venice… Charles is at first the innocent, beguiled by the Flytes and their hoity-toity ways, but as the plot progresses his involvement on their lives will have far reaching and unforeseen implications. 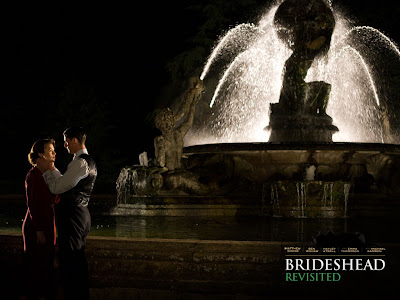 "some prices are very high"

Obviously some things have changed and much has been either chopped out or condensed but both my wife (who hadn’t watched the original series) and I found the film version to be engaging and thought provoking escapism. Hero of the piece Charles this time is much ‘straighter’ in the new version which comes across less ‘Brokeback Revisited’ and more a focus of how Catholicism induced guilt wrecks lives however posh you are. It’s beautifully written, wonderfully shot and the characters are ones worth spending some time with. Heavyweight support is on offer in the form of Emma Thompson and Michael Gambon – plus I am a big Matthew Goode fan, be sure to look out for him next year as Ozymandias in the much anticipated ‘Watchmen’.
I admire Jarrod’s style as a director, he cut his teeth on gritty TV dramas like Cracker and Silent Witness and here he demonstrates that he is just as at home with large scale period drama. Waugh fans of either the book or TV series should be widely pleased with the new film version as it manages to keep the decedent spirit of the original whilst adding enough nice additional touches to make this a viable companion piece.

Tasty Action: ööööö (5)
+ Drinking is not a hobby

Gratuitous Babeness: ööööö (5)
+ Haley Atwell is a bit of a fox

Mind Blight / Boredom: ööööö (5)
+ Something for everyone here

Comedic Value: ööööö (5)
+ Amusing in places but not a comedy
Arbitrary final rating: öööööööö (8)
Decent remake that delivers the goods.
Liable to make you:
"fancy some posh"
DM Poster Quote:
“lifestyles of the rich and frivolous..."
Posted by Matt Adcock at 12:26 am

This production to me is like a high school production and compared to the original is rubbish. The original Granda production is the masterpiece that cannot ever be duplicated. End of story.