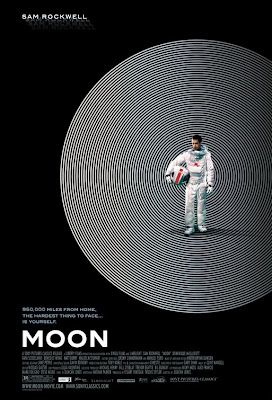 Moon is an amazing head trip from director Duncan Jones – also known as ‘Zowie Bowie’ yes, son of Major Tom himself David. In the near future earth's energy requirements have been solved thanks to the miracle of Helium 3, basically solar energy absorbed by moon rocks and sitting there waiting for us to mine it and send it back to earth.

Sam Bell (Sam ‘The Assassination of Jesse James by the Coward Robert Ford’ Rockwell), is the lone miner serving his three year shift alone in the Lunar Industries mining complex that is pretty much completely automated. With just a couple of weeks left before he can return home to his foxy wife (Dominique ‘Dark Floors’ McElligott) and his daughter Eve (Kaya ‘Effy from Skins’ Scodelario). Sam’s only company in the moon complex is GERTY a HAL-like computer that has an emoticon – smiley face / sad face screen and larger robot arm… GERTY (voiced to perfection by Kevin Spacey) is programmed to protect and look after Sam, but he begins to suspect that all is not what it seems after things take a drastic turn when he has an accident…

The Clint ‘former lead singer of PWEI’ Mansell melancholy soundtrack works with some truly inspired visuals to create a captivating mood of pervading pensiveness. This is backed up by a slow burning and understatedly intelligent script that goes more for a build up of hypertension rather than bang-whizz jump from your seat shocks.

The special effects work well too, putting to shame many bigger budget sci-fi efforts, Moon’s closest space based companion film from the last decade for me was the Danny Boyle’s excellent ‘Sunshine’.

I won’t go into any details of the plot as Moon is a film best enjoyed without knowing too much about it… All I will say is that despite the slow pace and lack of traditional ‘action’, Moon still blew me away, there were echoes of one of my favourite sci-fi films Peter Hyams’ ‘Outland’ at times as a countdown to arrival mechanism comes into play…

Sam Rockwell is gives a great performance as a man driven over the edge by forces he cannot contemplate – I urge you check this out as it is certainly one of the top ten best films of 2009!

Darkmatters final rating of: ööööööööö (9 – in space nobody will hear your jaw drop…)

Action 6 (just enough and perfect when it happens)

Style 9 (ground control to Major Tom, love the look of your film!)

Babes 6 (there are babes but not in the flesh)

Spiritual Enlightenment 8 (would you get on with yourself?)
Posted by Matt Adcock at 12:44 am

this is one movie i got to watch..