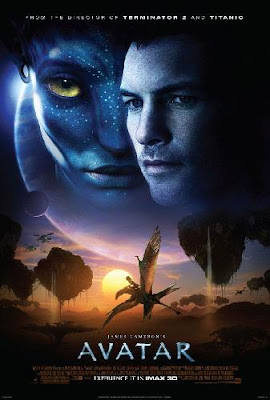 ONE WORD SUMMATION: Imax-tastic
“You are not in Kansas anymore. You are on Pandora, ladies and gentleman.”

This is the intro given to the new soldier grunts as they arrive for their tour of duty on the planet moon Pandora – a vibrant place teaming with strange alien life… This is a world where the air is un-breathable, the plant life hostile and the alien population wild and savage but it is also the source of a highly valuable mineral. That is why the ruthless RDA Corporation has sent their military might with the mission to potentially evict the native Na’vi aliens by force. The secret weapon of the RDA is their AVATAR programme which allows humans to of control lab grown Na’vi bodies, with a view to establish relations with the aliens and persuade them to move.
Enter wheel-chair bound marine Jake Sully (Sam ‘Terminator Salvation’Worthington) who takes the place of his deceased brother on part in the AVATAR programme. Sully manages to befriend the Na’vi and falls in love with their princess Neytiri (Zoe ‘Star Trek’ Saldana). When it becomes clear that they do not wish to move from their home, Sully becomes caught between the two sides as greedy RDA boss Parker Selfridge lets his bloodthirsty Colonel Quaritch (Stephen ‘Public Enemies’ Lang) unleash his war machine on the Na’vi.
Director James Cameron has created an unsurpassed eye-popping visual feast with AVATAR – reportedly costing over $300million to make. I can guarantee that you’ll never have seen such immersive, impressive, jaw dropping special effects. The world of Pandora is an absolutely stunning creation. This is ‘high definition cinema’ like never before and the spectacle is even more amazing in the 3D screenings which I’d highly recommend choosing. The attention to detail is sumptuous, the imagination behind the alien world and the kick ass human future technology sets new standards in sci-fi excellence. Having ‘Aliens’ veteran Sigourney Weaver on hand as lead scientist Dr. Grace Augustine also adds a lovely subliminal link to Cameron’s previous alien epic.

If you want to pick holes in this technological marvel you might take issue with the ‘off the shelf’ goodies vs baddies coupled with love story plotline. Oh and the Leona Lewis theme song is a bit poor but these are minor grumbles for a film that delivers almost 3 hours of heavy duty entertainment. AVATAR is a ‘must see’ on the big screen – to quote my son James “this is the film of the year”.

Action 9 (awesome when it kicks off!)

Spiritual Enlightenment 8 (Are we human - or are we dancer / AVATARs)

I cannot understand why did this movie earning so much. Too thin on plot too loud on cosmetic.