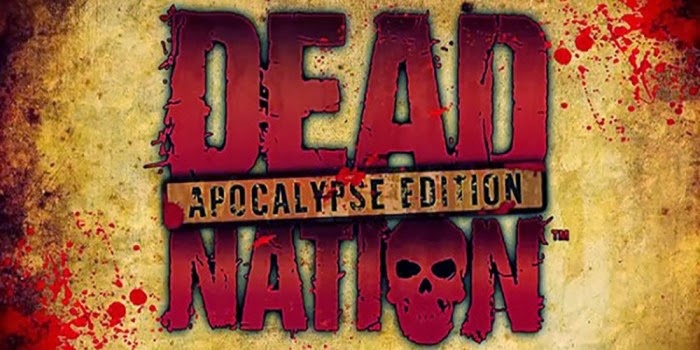 Developed by Housemarque (who made the excellent ‘RESOGUN’)

That time has come!!

Dead Nation is without doubt one of the best zombie-em-ups yet (and let’s face it, there are quite a few to choose from out there) – slick, brutal and very very fun to play. Downloading this game (which is lovely and free thanks to PS+) I was immediately impressed with the cool menus, the innovative features (e.g. a real time world-wide leader board which shows how each nation is getting on clearing the zombie hoards etc. so you can see if we in the UK are staying ahead of our cheese eating French friends!?). 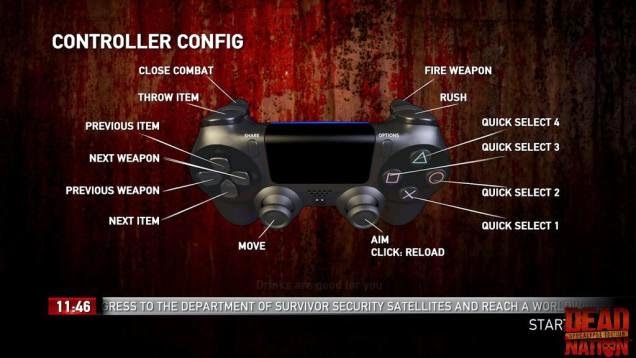 Offering players a seriously satisfying variety of weapons with which to blow the shuffling / creeping / running menace of brain hungry scum back to hell, Dead Nation – with a superb ‘RPG lite’ mechanic that lets you upgrade and buy various guns (and extend their rate of fire, impact power or clip size etc.), grenades and mines from weapon shops. Your base weapon is an assault rifle which has unlimited ammo, a good amount of power / accuracy (the laser sight helps). It won’t be long however before you’ll want to add a submachine gun for crowd control and a heavy duty punch packing shotgun too – perfect for those ‘close encounters’. There is also a rather tasty flamethrower which is highly satisfying for bar-b-q ing some undead – who light up the night sky like hundreds of walking fireworks. 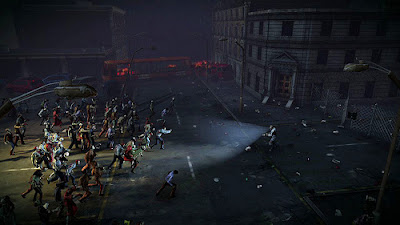 "The rush for the new Churches album got out of hand!"

Control wise players use the two dualshock sticks – one to move one to aim in a similar manner to Super Stardust HD - yep another tasty HouseMarque game - these guys are talented developers!

The feeling of being alone in a dark, devastated and highly dangerous city is highly adrenalin pumping, lit only from with the crackling neon glow from the few shops left, the sporadic pools of light from the occasional working streetlamps, the smoking fires and of course your trusty flashlight.

Abandoned cars hide hidden cash and possibly health packs, which can also be found in vending machines and treasure crates – and occasionally dropped by fallen foes. Cars can also be used as weapons because shooting some vehicles activates their alarms, which attracts nearby zombies who attack it – which is good time to shoot the fuel tank and torch the whole lot!

"one man and his high powered weapon can make a difference"

As you ramp up the difficulty levels the AI noticeably improves, and you’ll be hard pressed to make it through, fortunately the checkpoints are well positioned and if you die you can restart that section from a weapon shop – so possibly upgrading your weapons before retrying might make the difference.

Strategists are well served too – luring the nastier heavy mutants who can absorb your gunfire to a care or vending machine which you’ve rigged with a mine is satisfying strategy! There is also a great co-op mode (including online) so you can shred hundreds of zombies together – providing cover and jostling for rank yourself with online leader board.

Then there's also the lovely PS4 share button enables 'Broadcast+ mode' where as you stream your game to a viewing public, they in turn can actually influence your playthrough. Kind of like Need For Speed Rivals did via tablet app - viewers can hit you with additional zombie spawns or reward you with extra ammo drops etc - it's compelling because you don't want to suck at a game where you know people are watching!!

All in all Dead Nation is shaping up to be a fantastic addition for shoot-em-up loving PS4 gamers – it even comes with a Platinum trophy which is rare for a download game. Too bad for Xbox One owners that this won’t come their way as it really feels like ‘AAA’ title, even if it's a downloadable treat.

Now if you'll excuse me I need to get back to dispatching the undead!!