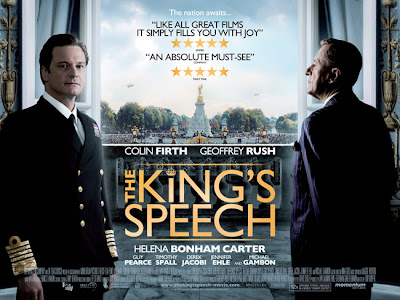 You are cordially invited by royal decree to attend this rather wonderful telling of a key period in the life of King George VI, the father of our current Queen Elizabeth II. The King’s Speech is a fantastic period romp driven by Colin Firth’s central performance which puts his well-practiced starchy Mr Darcy persona to excellent use.

King George or 'Bertie' as his unorthodox speech therapist Lionel Logue (a brilliant turn from Geoffrey Rush) calls him, is afflicted with a debilitating stammer. Now for a mere commoner this would not perhaps be such a major issue. But for a monarch – especially one who is called upon to rule the nation as the Second World War erupts and needs the ability to rouse the populace and maintain morale - it can be a national problem.

Tom Hooper’s film opens in 1925 as George (then Duke of York) has to address a packed Wembley Stadium, he makes a complete balls up of it thanks to his stuttering delivery. Various speech therapists are called in – all to no avail although it is amusing to see a future King stuffing marbles into his mouth as one ‘expert’ recommends. 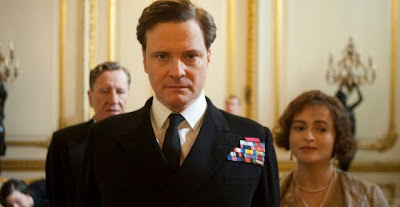 "Everybody keep calm and carry on!"
The cast are uniformly great and reads like a who’s who of British talent, Michael Gambon stars as George V, Timothy Spall pops up as Churchill and Guy Pearce plays older brother Edward VIII. Even the minor roles like George’s children boast familiar faces including the brilliant ‘Karen from Outnumbered’.

What makes the film so watchable though is the sparring between George and Lionel whose scenes are often hilarious such as when Logue in a bid to get the King to loosen up asks George: “Do you know the "f" word?” George VI replies: “Ffff... fornication?” This Aussie / Brit culture clash just adds to the sense of fun that underlies the film and help elevate it above more ‘dry’ seemingly similar movie fair like The Queen.

Firth really should bag some shiny movie awards for his role here – and if there is any justice then The King’s Speech should be in line to clean up with Oscars and Golden Globes a plenty.

Horror ö – be afeared only if you stutter

Babes öö – Helena is still a fox (see below)