That’s 520 films seen, mused over and written up, many of which you’ll find on this blog (alas Darkmatters only dates back to 2004).

So it is a rare luxury when I get the time to review a film not for the papers but rather just because it was such a joy to watch – and Somewhere is a film that deserves reviewing.

Sofia Coppola is a fascinating director from The Virgin Suicides through Lost In Translation and Marie Antoinette she has a unique style and repeatedly visits certain themes. People often love or hate her films, there are very few ‘meh’ responses as Coppola treads a cinematic path all her own – at once fantastical, whimsy, soul-wired and life-affirming.

Somewhere is the tale of Johnny Marco (Stephen Dorff), who is film star, womaniser, hard living ‘guy’ first and sometime father to his smart, lovely daughter Cleo (Elle ‘going to be a bigger star than her sister Dakota’ Fanning). The film eschews having a traditional story and rather works through three ‘acts’, each of which sees Dorff in a different light.

Somewhere is a very visual film, it may have little dialogue but it still has a brilliant ‘feel’ which viewers will either connect with and love or reject and hate. The father / daughter bonding is the engine that drives the plot – basically we get to tag along as Cleo visits her dad and gets to experience his movie star lifestyle.

"Elle Fanning - the perfect daughter?"
Before his daughter’s arrival, women are just objects to Marco – expressed in a great double bill of scenes where hot blonde twins pole dance for him in his Chateau Marmont hotel room – and despite their eager efforts he can barely keep himself awake. When Cleo impacts his life he has to do dad duties such as watching her ice-skate and the remarkable juxtaposition of his seeing her as a girl developing into a woman makes him re-assess his whole world view.

Somewhere is a wonderful film – it made my top 10 films of 2010 and I highly recommend seeking it out!

New Darkmatters Film Scoring for 2011 (well I say ‘new’ but since 2008 we have tried to hold the line of giving scores out of ‘10’ – before that it was the good old ‘out of 5’ but due to popular demand – i.e. the emails from PR people etc - we will return to the industry standard out ‘5’:

So out of 5 you have to go with a Darkmatters:

Babes öööö – Actors get the cute ones! 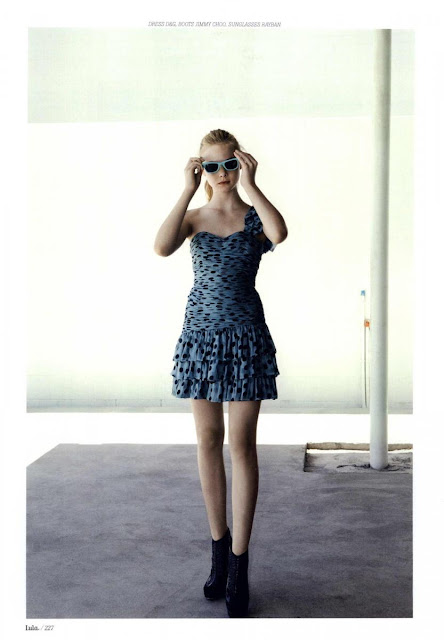