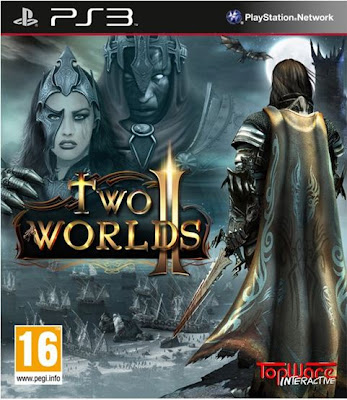 Role players rejoice, shake your ten sided dice and don your best elf costumes of power +1 because the venerable Elder Scrolls and Dragon Age – the console Role Playing Games of note from the last few years – have a new competitor…

Lo here cometh ‘Two Worlds 2 – The Temptation’ from makers Reality Pump – and it be a direct sequel to the original ‘Two Worlds’. Indeed the action taketh place shortly after the events portrayed in the first game but don’t let that put you off if you’ve never plated Two Worlds before as the ‘2’ stands as its own game and does not require knowledge from before. 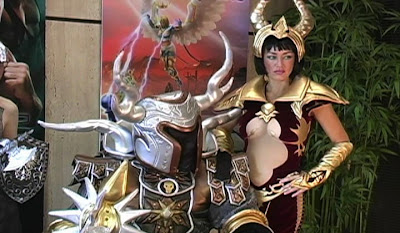 "bold warriors and scantily clad women - with horned helmets"
Two Worlds 2 is subtitled “The Temptation” and that temptation seems to be ‘making it available to as many gamers as possible’ because it marks the series’ debut on the PS3. Yes in a move much like Mass Effect series jumping over to the Sony machine with the second instalment – whereas originally only being found on the Xbox 360 and PC.

The mythical action takes place in a place called Eastern Antaloor, in regions surrounding the city of Oswaroh and across the Drak’ar Desert – just down the road from Luton. Ah forsooth, as you can probably tell from the WTF place names we’re knee deep in nerd-em-up fantasy here. 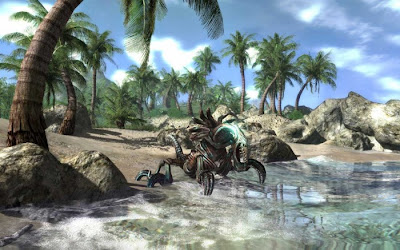 "weird things abound in Two Worlds 2"
The good news be that Two Worlds 2 is a much improved beastie than the first game which was riddled with bugs and generally written off by gamers as a valiant failure. This time the makers have raised their game and brought more intricate missions, much improved voice-overs, a new graphical engine and sexy battle animations. The gameplay itself has been total retooled so that it actually works really well, crashes less and delivers some pleasingly crunching fantasy combat.

So might we have a new RPG heavyweight contender on our hands?

In a words ‘yes’ - Two Worlds 2 is a decent free roaming game where you can explore a beautiful world which is yours to freely adventure in. The map is big – and enjoyably varied with deep jungles, marshes, forests, deserts and cities aplenty. It is also populated with a good range of different characters, critters and NPC plot drivers both friend and foe – who will give you quests or a beating depending how they feel about you. The sheer size of the world map means that you’ll be using the teleports a lot and having a horse is necessary to prevent lots and lots of walking! 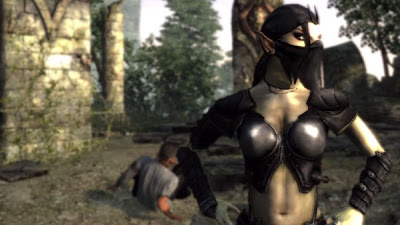 Fortunately gameplay is quick to pick up and works well with the trusty DualShock controller. You’ll soon be fighting, collecting experience and levelling up to your geek heart’s content. Two Worlds 2 brings a good range of weaponry – including a nifty magical Oculus which is a floating eyeball you can send out before you to check for enemies (and if you have an upgraded one, can even fire a magic missile or place a trap to confound them – which is lots of fun).

Much emphasis is placed on looting your fallen foes, robbing treasure chests and breaking into houses to help yourself to the contents of the cupboards – the lock picking mini game is well worked too with just the right balance of skill / luck. You’ll get nowhere fast if you’re too pious to pick a pocket or two… as loot = cash and cash = better weapons and equipment which you’ll need for some of the more fearsome beasties and baddies you’ll encounter.

As is the norm for RPGs you’ll spend a lot of time grabbing different armour, weapons, potions, magic trinkets etc – the spoils of war add a satisfying incentive to find and take down ever harder enemies. Plus there are plenty of merchants to trade with so you’ll need to amass plenty of cash.
The spell crafting system is called ‘DEMONS’ which stands for Dynamic Enchantment, Magic, Occultism and Necromancy System – and it works a treat for all you Gandalf wannabes despite the clichéd name.
All in all Two Worlds 2 is a great RPG – you probably won’t go near this if you only play Call of Duty, even though it does deliver a fair combat blast. Sure it feels a bit shallow compared to some of the other games of the genre (it lacks what even space RPG Mass Effect packs in with a huge wealth of background ‘universe establishing’ documentation) but Two Worlds is without doubt a perfect stop gap for RPG fans until the epic big guns of Dragon Age 2 and Elder Scrolls Skyrim arrive later this year.