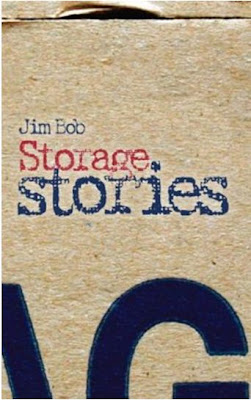 “Now Carter USM started out in business as some granny farmers, they were infamous for fifteen minutes and he appeared on Top of the Pops. Then they somehow got themselves on board The Starship Enterprise Allowance Scheme, with a Prince of Wales award for pushing catchy songs and endorphins…”

But fame is a fickle friend and despite being (in my opinion) the best and most altogether wonderful indie pop punk rock band ever – alas they are no more. So what happens to pop stars when they are no longer ‘stars’ - Jim Bob blows the bloody doors off the après pop existence in this heart breaking, gorgeous and rather excellent novel that feels deeply autobiographical even though it is plainly a compendium of top notch fictional and maybe not so fictional anecdotes.

Jim Bob’s first novel sees the hero – an ex pop star - having to work for a living in a self-storage company called ‘2001 A Storage Space Odyssey’ LOL. It’s life Jim, but not as we know it as each storage renting customer has their own amusing. tragic or oddball tale behind their space requirements.

There’s a great cast of misfits and memorable characters including love interest Janie who looks like Juliette Binoche, best mate Carl who has a taste for DIY surgery and Gary the Bubblewrap boy… Prepare to laugh out loud at hypotheses such as where boy bands are taken when they outstay their usefulness or a million savvy pop culture references that add sheer joy to readers who have enough brain cells to pick up on these sort of things. My pick of the bunch is a murder confession from a homicidal computer named HAL (yep – like in the film).


Out of a possible 5 you have to go with a Darkmatters:

Me wearing my Carter USM shirt in The Guardian
Posted by Matt Adcock at 11:16 pm

nice review, going to have to buy this now!