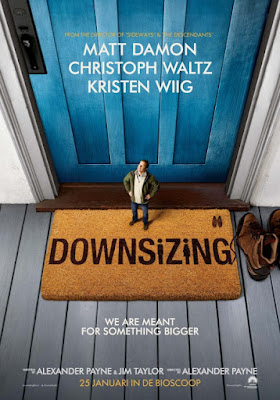 “Get up and open your eyes. This small world is filled with things to see...”

Downsizing or ‘Honey I shrunk the fun concept into a campaigning “dramedy”’ as it’s more accurate title would be, is an odd film and hard to put in a genre. The trailer makes it looks like comedic social satire with dark edges but the actual film is a preachy meditation on the dangers of we humans not being nice to each other or our planet. 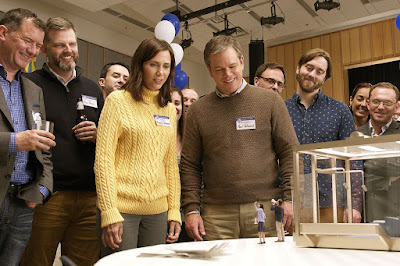 small but centre of attention!?

The inventive plot revolves around the potentially world saving scientific gimmic that allows humans to be shrunk in size to about 4” and live their lives in tiny communities which massively reduce the drain on the planetary resources. The selling point for ‘going small’ is that you get way more for your money as huge mansions, jewellery and other luxuries are relatively cheap on a micro level so even those on moderate incomes can live like little millionaires.

Paul Safranek (Matt ‘The Martian’ Damon) is your average guy, unsatisfied with life and struggling to pay for a new home so he and his wife agree to the take the downsizing plunge. We get to follow Paul’s odyssey as he comes to terms with humanitarian issues along with personal ones. 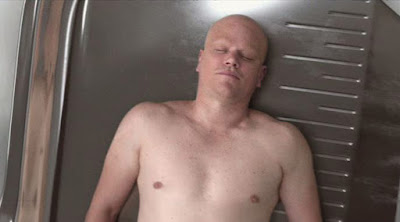 By chance, he meets political dissident Ngoc (Hong ‘Inherent Vice’ Chau) and through her learns some big life lessons. The two actors certainly share some great chemistry throughout which drives the film, even when the moralising message threatens to bog down the plot.

Director Alexander ‘Sideways’ Payne) has created a film that if you can give it a chance will provoke you to think hard about the world we live in, society in general and your part in it all. It doesn’t always work and the climax feels slapped on unnecessarily but it is always welcome to see filmmakers taking risks with ‘out there’ ideas.

One less subplot features Paul’s dodgy neighbour Dusan (Christoph Waltz), and his slimy pal Konrad (Udo Kier) who live like kings thanks to their illicit import business, it feels like padding and sits uneasily with the wider story arc.

There are some small pleasures to had but it requires investment!

Laughs öö  – The funnies dry up after a while

Horror öö –  Slightly icky but nothing too grim


Spiritual Enlightenment öööö - LET'S SAVE EACH OTHER!