“You really don't know who I am? Genie, wishes, lamp, none of that ringing a bell?”

Disney fans should prepare themselves for a whole new (non-cartoon) world as the much-loved animated Aladdin from 1992 gets a live-action reboot.

The 2019 retelling sees Will Smith step into the big blue Genie shoes so well filled previously by Robin Williams and the good news is that it works. Smith keeps the fun mischievous spirit but adds enough of his own Big Willie style to make this version something refreshingly new.

'nothing up my sleeve'

Full disclosure – I went to see this with very low expectations. Am a big fan of the original and worried that this remake was merely a cynical cash-in. Two hours later I found that I’d really enjoyed a colourful and good-natured sing-along romp and now actually look forward to seeing it again.

For those not aware – this is the tale of a cheeky chap named Aladdin (Mena ‘Jack Ryan’ Massoud) who meets a young woman in the marketplace of the town where he makes a living as a ‘street rat’ thief. Unaware that she is Princess Jasmine (Naomi ‘Pink Power Ranger’ Scott) incognito, he’s totally smitten he tries to woo her.

But the path of true love doesn’t run straight, and young Aladdin gets caught up in the plan of evil ‘want-to-be’ Sultan named Jafar (Marwan ‘The Mummy’ Kenzari) who craves a magic lamp containing a wish-granting Genie (Will Smith).

It’s no surprise Smith steals the whole film with his larger than life - literally – charisma plus his comedic timing and the slight hip-hop vibe on his songs really work. Scott is also great as the girl-power Jasmine, she gets a new song which adds to her feisty role and while not classic Kenzari does a good enough villainous performance.

The cinematography, animal CGI and costumes are well done and crucially the musical numbers are good. Lots of folk in the screening I was in were heartily singing along. 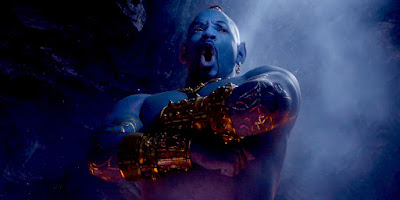 'what cha wishing for?'

Director Guy ‘Sherlock Holmes’ Ritchie takes the original plot and adds some nice new elements. It shows how far he has come as a director to deliver a great family friendly flick which is a million miles away from his Lock, Stock and Two Smoking Barrels gangster days.

Aladdin is a Genie-em-up that delivers on at least some of the magical wishes of film fans!

Awesomeness öööö – A jolly good show all round

Horror ö – Threat from baddie but nothing too grim

Spiritual Enlightenment ö - Sing for the moment!
Posted by Matt Adcock at 4:40 pm