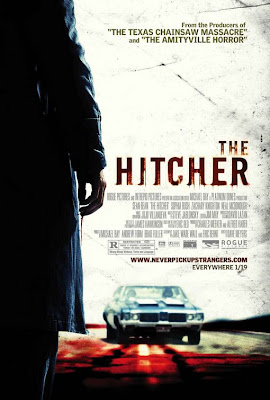 Here we are again – watching aghast as Hollywood spews out another mediocre new version of a perfectly good film… Accompanied to the sound of easy money being plucked from the pockets of cinemagoers who were either too young to see or those who still harbour positive feelings towards the original. I must admit that it’s easy to find yourself curious to see what a hot music video director, new cast and bigger budget can do with the ready to use materials.
The Hitcher was an original 1986 bona fide cult classic, featuring Rutger Hauer as a psychopathic hitchhiker who torments a young couple by murdering everyone around them in highway based deadly game of cat and mouse. Not much has changed in the 2007 incarnation except that this time Sean Bean takes over the role of the ‘last person you’ll ever pick up’ and has a decent stab, shot, strangle and dismember at the role…
Turns out that he’s the only decent member of the cast (never thought I’d write that about our own Mr Bean).
The new version’s cinematography might be gorgeous and they do have a cooler car this time but eye candy alone cannot make up for the overall tension bypass. Female viewers may be happy that the writers decided to empower women everywhere by making the girlfriend the heroine rather than the original’s heroic boyfriend – but this move takes away the whole underlying them of the disturbed Hitcher helping the boy become a man – through homicide…
The new Hitcher fails to do almost anything as well as the original, characters just don’t ring true, their motives are inexcusably muddled, and the plot is a master class in how to surgically remove many of the best bits of the film you are remaking.
Call me a weirdo but just for once wouldn’t it be nice find a remake that ramped up the horror and slipped in new mind blowing scenes instead of watering down or ejecting most of what made the original so effective. The Hitcher might please a few new horror fans that have been raised on the weak, gutless so called ‘horror’ movies of the last few years but for anyone looking for decent scary road based mayhem, the original is still where it’s at.

Out of 5 - you have to go with a generous 2.5 (for smooth camera work, the car and Sean Bean's effort) 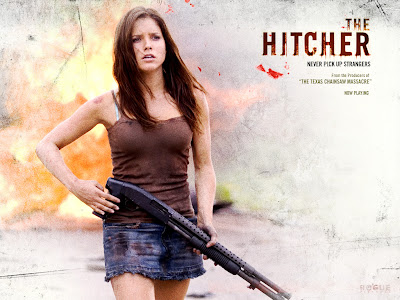