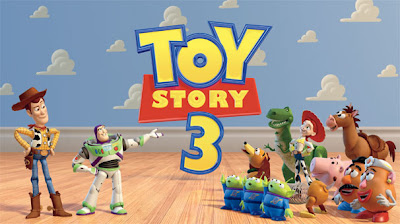 Prepare to go to infinity and beyond – one more time… And I’m delighted to report that the genius’s at Disney / Pixar have saved the best trip till last.

This rag tag gang of toys have come into Andy’s possession over the first two films and have braved some truly excellent adventures. Now the fateful time has come with Andy being 17 and off to college the future looks bleak for these old school toys in the age of videogames, iPods and online distractions…

Woody gets picked to accompany Andy to college for nostalgia value but for the others it’s a one way trip to the attic. Things don’t quite work out that way though and before you can say ‘is this the end for our beloved heroes?’ the group are trapped in a community nursery where they have ‘a playdate with destiny’. Sunnyside Daycare you see is run by an evil strawberry-scented bear named Lotso (Ned Beatty) who puts the new arrivals into the early years room where they get badly mistreated.

Who will survive and what will be left of them? It’s an absolute blast finding out, especially with stand out scenes involving Buzz getting switching into ‘Spanish Mode’, Ken (from the Barbie toy line) doing a fashion show and a nail-biting frantic battle to escape being incinerated.

By the emotional end of Toy Story 3, my youngest son was in tears and everyone in the cinema seemed stunned by what they had witnessed. The CGI is an artistic masterpiece – here seamlessly blended into 3D which adds depth but doesn’t distract as it does in lesser films. There are few truly ‘all age’ films out there which can appeal and engage to anyone from 3 to 103 but Toy Story sets a fantastic new benchmark for entertainment excellence. See it, love it, see it again!!

The toys get zapped into an alternate reality by evil emperor Zurg... And find themselves in Shrek's swamp - where they have to battle the ogre in order to see which will be the biggest grossing animated film series of all time!