“I can't just run off and join the circus.…can I?”

Roll up, roll up, The Greatest Showman - Phineas Taylor Barnum (portrayed with absolute gusto by Hugh ‘Logan’ Jackman) is here to astound you with his sights, sounds and general feel-good charisma!

This is very much an ‘inspired by’ rather than factual story of a fool how dreams big as young poor Barnum vows to be a make success so he can give his beloved Charity (Michelle Williams) the life she deserves. With nothing but a dream and a selection of very catchy songs in his heart it might be a tall order. 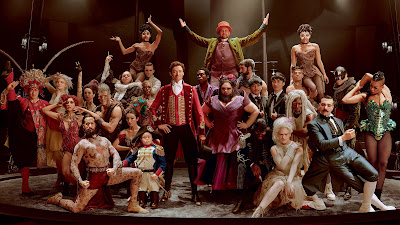 But you don’t get the moniker ‘The Greatest Showman’ without being able to pull together an eye-popping circus which delights the masses, unnerves the rich and provides a home for those society has deemed freaks. The show is a hit but whilst bringing in the money, the bawdy low brow spectacle doesn’t bring the social status Barnum craves so he gambles big on the gorgeous ‘Swedish Nightingale’, opera singer Jenny Lind (Rebecca ‘The Girl on the Train’ Ferguson).

What you get is an uplifting, joyous, sing-along experience that effectively utilises the winning song writing talent from La La Land and adds plenty of razzle-dazzle razzmatazz. The musical numbers are actually glorious and whilst the plot does white wash a lot of Barnum’s dodginess – it serves to make this a family-friendly romp as oppose to a treatise on the oppression and exploitation of those born different to everybody else.

Everyone goes about the show business like their lives depend on it, and the energy is infectious. Sure those most cold-hearted out there might scoff at the surface level plot which bounces along mostly as a structure for the films song and dance numbers to hang on. But if even those who would never darken the door of a musical theatre production will find plenty to enjoy as Jackman gives Barnum real heart. 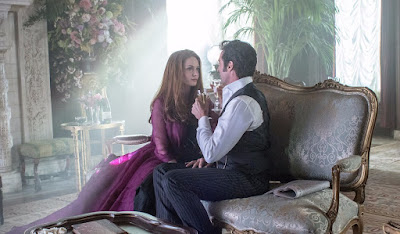 "Do their smiles look fake?" he retorts when one snarky critic confronts him saying everything about his show is fake, and by the end of the film your smile won’t be fake either…

Laughs ööö  – Great fun if you can stomach the cheese

Horror öö – Some bigotry and hatred (isn't there always!?)


Spiritual Enlightenment öööö - Life is better with a song in your heart
Posted by Matt Adcock at 10:20 pm