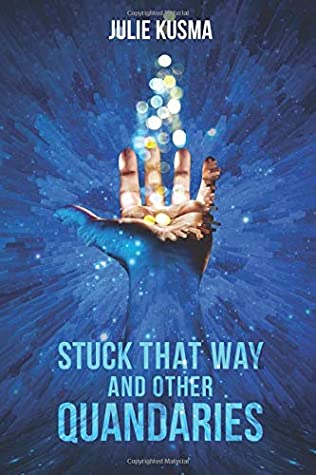 STUCK THAT WAY AND OTHER QUANDARIES
Julie Kusma (@JulieKusma)
Reviewed by Matt Adcock (@Cleric20)
‘Huge chunks of fleshy meat covered the bottom of the tub. Sawed bone protrude, and muscle and veins dangled from the edges of the hacked carcass…’
I love a good spooky short story – so what better than a collection of them like: Stuck That Way and Other Quandaries which contains several. These short tales of terror were initially published in multiple pieces (bit like the fates of some characters) when the author Julie Kusam (who is known as The Queen of Horror) was a content writer for an online publisher.
I asked her how it came about and what her inspirations were – she said:
‘I compiled several, adding an unpublished piece, and created this paranormal, horror collection. The title story, “Stuck That Way” is based on a conversation I had with a friend. We were discussing energy, chakras, and one’s ability to control their personal vibrational quality. I wondered, what if in the afterlife you become manifest corporeally when your frequency slows? This story is full of spiritual irony, with a playful dose of the age-old adage about making an ugly face and getting stuck that way.

The second story, “Something Lurking” is based on the woods behind my house and the strange behaviour my dog often displays at night. I’ve heard noises emanating from the woods. It can be frightening on starless nights because one never knows what might be lurking.

“By Induction” is a personal favourite based on the magical practice of freezing individuals out of your life. Except the main character’s belief in her power to affect life while ignoring life leaves her most significant impact yet. Irony is one of my favourite literary tropes. 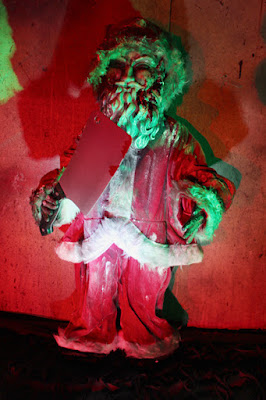 'ho ho ho...'
“That’s Creepy, Santa!” is the fourth short story, and yes, it is horror. So, if you’ve never read a Christmas horror story, you’re in for a scary treat. A couple, excited to spend Christmas Eve home alone, finds an unexpected present left at their front door, and what waits inside has different plans for their evening.

“Relevant Evidence” is a story written around contest parameters, which included someone who gets lost and cannot find their way back, and a sock. This story popped in my head. I didn’t make the final round, but I ended up with an interesting story and an unusual POV. The final short story is
“Devilish Games” and was inspired by an antique chair adorned with brass devils. This piece of furniture became the basis for this story as I wondered if an ancient god could become trapped inside an object. You’ll have to read it to see.’
I enjoyed my read through these tales – each brings its own unnerving vibe and all are worth a look. My favourite was ‘That’s Creepy, Santa!’ which brings some festive bloodshed to the mix. Julie writes with a direct style which can creep you out with a minimum of fuss or any need for bloated prose.
Whatever your personal fav way to get scared, there is likely to be something here to tingle your spine. Some of the stories are stronger than others but this short anthology is worth seeking out for all those who relish the darkness that can make the synaptic jump from a page to the imagination.
Out of a potential 5 - you have to go with a Darkmatters:
ööööö (5 - feel the darkness!)
Click to buy your copy of Stuck That Way and Other Quandaries Here
Read more Sci-fi!!
Click this banner to find out more about my near future nightmare cyberpunk novel (soon to be a comic too)...