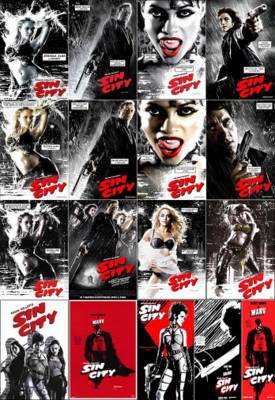 
Walk down the right back alley in Sin City and you can find anything… and any one of these low lives…The population of Sin City is made up of those who must live, whether by choice or through circumstance, on the darker side of urban existence. Some have utterly succumbed to corruption, filth and evil. Others are still trying to survive with some part of their souls intact.

MARV:
Marv was just born in the wrong century. He belongs on some ancient battlefield, swinging an axe into somebody's face. But here he is, here and now. And whoever killed the woman of his dreams is going to pay. In blood.
– Frank Miller
At the center of the first story in SIN CITY is Marv, a hulking, down-on-his-luck bruiser. Marv gets lucky one night with a beautiful woman who shows him tenderness. By dawn, she is dead -- and Marv is determined to find her killer no matter the cost.

GOLDIE:
Damn it, Goldie. Who were you and who wanted you dead?
-- Marv
Marv’s one-night stand and one true love, Goldie, is played by Jaime King


KEVIN:
He was a tortured soul, tormented by guilt.
-- Cardinal Roark on Kevin
As Marv seeks vengeance for Goldie’s death, he faces down a nightmare of a villain: the chillingly placid, cannibalistic Kevin. In a complete change of pace, Elijah Wood of “The Lord of The Rings” and Frodo Baggins fame takes on the darkest of criminal roles.

At the heart of another SIN CITY tale is Dwight (Clive Owen), hard-nosed ex-photo-journalist and the one man the working girls of Sin City’s Old Town can trust. He’s tried to change his life. But when Old Town’s ladies come up against The Mob, and a cop winds up dead, Dwight is drawn right back into the fray to protect his friends.


GAIL:
She's the boss. Beautiful. Merciless. Any of the Old Town girls are hair-trigger ready to die - or to kill - for her. And they wind up doing both. Plenty of both.
-- Frank Miller
As Dwight’s story unfolds, he must team up with the heavenly and fierce Gail, the leader of Sin City’s prostitutes, who once saved Dwight’s life and helped him gain a new identity. Gail, a vision in thigh-high, leather-strapped stilettos and an Uzi, is played by Rosario Dawson.


SHELLIE:
I ain’t playing hard to get. I’m impossible to get.
-- Shellie
One of Frank Miller’s favorite characters in SIN CITY is local waitress Shellie, who traverses all three stories in the film, but is key to Dwight’s tale. When Shellie’s attention to Dwight triggers Jackie Boy’s anger, a rampage results. To play Shellie, Miller and Rodriguez cast Brittany Murphy.

JACKIE BOY:
I may be dead, but you are screwed!
-- Jackie Boy
Jackie Boy, the once noble, now corrupted cop who stirs up a whole lot of trouble in Sin City’s Old Town, is played by Academy Award winner Benicio Del Toro.
MIHO:
You can scream now if you want.
- - Marv
Another of Frank Miller’s favorite characters is Miho, the silent yet deadliest of the Old Town girls, played by Devon Aoki (“2 Fast 2 Furious). A kind of urban, female samurai, Aoki cuts up the screen with the same swords Uma Thurman used in Quentin Tarantino’s “Kill Bill” films.

MANUTE:
Nobody knows where he came from, and nobody ever will.He serves his masters ruthlessly. Efficiently. Brutally. Mercilessly. Pray you never meet him. The moment you do will likely be your last.
- - Frank Miller
A man so immense his punch is like a freight train, Manute is at once enigmatic and lethal. He is played by Michael Clarke Duncan, who garnered an Academy Award nomination as the gentle giant in “The Green Mile” and who previously starred as The Kingpin in “Daredevil,” also based on Frank Miller’s comic.

HARTIGAN:
Honor bound. A knight in blood-caked, grimy armor. Cop John Hartigan will sacrifice everything – his marriage, his job, his honor, his freedom, his dignity – all for the sake of a skinny little 11 year old girl
- - Frank Miller
If there is one pure hero in Sin City, John Hartigan is it. The last honest cop in town, he’s finally about to retire. But he has a final mission: to save the 11 year-old Nancy Callahan from the clutches of the deranged Senator’s son, Roark Jr. To play Hartigan, Robert Rodriguez immediately thought of Bruce Willis.
NANCY:
Imagine you find your way the sleaziest saloon on the planet. The place stinks, with all the usual stinks. There's a stage. The lights come up. You expect the worst. Then out dances an Angel. Perfect. Graceful. Beautiful. A dream come true. Nancy. Nancy Callahan. She amazes.
- Frank Miller

Now known as the sweetheart of Sin City, Nancy Callahan is seen in two incarnations. First, she is an 11 year-old girl in the direst danger. Then, she is an alluring 19 year-old exotic dancer who shines a light in the dark of the city portrayed by Jessica Alba.

The little snot. He ought to be dead. But here he is. Back in action. And he smells awful...
- Frank Miller

At the heart of John Hartigan’s story lies his nemesis, Roark Jr. (AKA “That Yellow Bastard”), a demented sociopath who is later physically transformed into a creature as ugly, yellow and downright odorous as his personality. Playing Roark Jr. and Yellow Bastard, under a veil of makeup, is Nick Stahl.
So now you've met some of the main players... buckle up for the ride of your life... SIN CITY opens in the UK this Friday 03 June 2005...
Posted by Matt Adcock at 1:16 pm

Quite an extensive site for reviews...keep up the writing!

britney murphy was the movies one casting mistake. what a fucking amazing film tho, I'd say it's comparable to pulp fiction. Great review matt