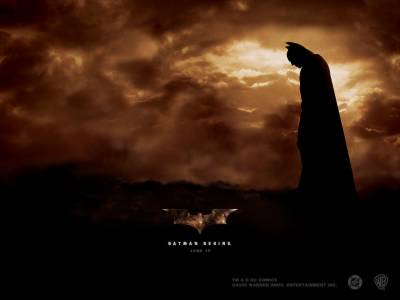 "They told me there was nothing out there, nothing to fear."

There is something out there in the darkness, something terrifying, something that will not stop until it gets revenge…

It’s me!!
Oh, no actually I’ve just been informed that it’s Batman and having seen Batman Begins I’d have to agree. This is the long rumoured rebirth of a credible Batman on the big screen after the zap-kapow-holyturkeyfest that was Batman & Robin by Joel Schumacher, which sunk the bat’s previous cinematic run. So can the Dark Knight strike back and deliver the quality batfilm that fans have been craving? In a word ‘yes’!!
Director Christopher Nolan has successfully taken Batman back to his gritty, brooding, brilliant comic book roots, and in the process made a powerhouse of a tale that impresses on all levels. This is no kiddie film either, Batman Begins is all about fear – right from the unnerving bat swarm opening there is a sense of menace dripping from almost every frame. Batman himself (a perfect anger and guilt driven portrayal by Christian ‘American Psycho’ Bale) is a mean, tortured vengeance bringer. No cheesy quips or camp codpieces – this Batman is the harbinger of violent justice, a shadow dwelling righter of wrongs. He is the reason criminals will learn to fear the dark and yet he is also believably human. Bale does a magnificent job of balancing Bruce Wayne’s guilt wracked billionaire playboy with the slightly unhinged righteous anger of his dark alter ego. Credit must also go to Michael Caine who is excellent as loyal manservant Alfred and to the lovely Katie Holmes who is exhibits real class and sassy determination as idealistic District Attorney Rachel Dawes. Other players are ‘honest cop’ Jim Gordon (Gary Oldman who looks spookily like the comic book version) and worldly warrior / mentor Henri Ducard – Liam Neeson who also does a fine job. Morgan Freeman is useful new character Lucius Fox who handily oversees Wayne Enterprises’ Applied Sciences division – home of the funky gadgets that give Batman his edge, oh and his ass kicking new Batmobile. The Batmobile is pretty much a character in its own right – and delivers potentially the best car chase of the year as it shakes off corrupt cops on highways, back streets and even leaping across rooftops.
And of course no Batman film is complete without the villains. Oh boy, Batman Begins has one of the most trippy villains ever in The Scarecrow (the ultra creepy Cillian Murphy) – this guy is sinister even when in his ‘human guise’ of Dr Jonathan Crane. But when under the effect of his nefarious ‘fear gas’ things get nightmarish very fast and sensitive youngsters will likely be having bad dreams for months… The crunching fight scenes must also push the envelope of what can be done in a 12a rated film but are fantastic to watch. Batman Begins brings the noise when it comes to action – convict ‘six onto one brawls’, ninja sword battles, scumbag thug takedowns… Batman certainly has his work cut out and that’s without having to deal with the Scarecrow. Throw in head-cracking crime boss Carmine Falcone (a nicely smug Tom Wilkinson) and over vengeful vigilante Ra's al Ghul (Ken Watanabe) with his League of Shadows and suddenly it looks a tall order for even Batman to save the day…
Christopher Nolan and co-screenwriter David S. Goyer have delivered something very special here – Batman has never looked better or been so engaging to watch. Batman Begins rips up the previous film attempts and sets up a potentially awesome sequel. The Dark Knight has returned in style – go and see for yourself…

well i always leave a comment to blogs which i vote at battle of the blogs. LOL 8D

sweet review matt i really want to see this

Now I am really looking forward to seeing this film...

Good review too Matt though some of us more wussy typs needed more of a warning about that scarecrow dude - he was nasty and scary!