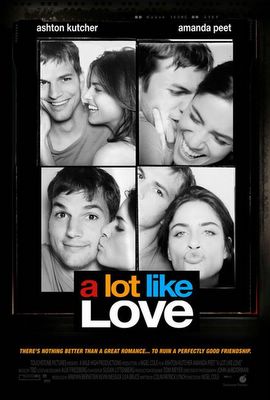 You know what they say… “There's nothing better than a great romance... to ruin a perfectly good friendship.” Man, not to mention wreck this latest romantic comedy too…
A Lot Like Love really should come with the following health warning: ‘Caution: this film may contains scenes that you find seriously dull. If you feel nauseous at any point whilst watching this steamingly unfunny, coma inducing turkey, well, you only really have yourself to blame.’
I’ve really tried to work out why A Lot Like Love didn’t work for me and the list of faults I compiled was long, distinguished and much more fun than watching the film, which can’t be a good thing?
Firstly – the main couple Oliver (Ashton ‘Dude where’s my acting career?’ Kutcher) and Emily (Amanda ‘cute / odd looking / cute depending on the hairstyle’ Peet) simply do not generate enough voltage between them to make you care if they end up together.
Secondly – the so-called ‘funny’ bits just aren’t very funny… And finally, seeing as the two leads sleep with each other before the credits have barely finished rolling there’s no ‘will they won’t they?’ dynamic which can at least give the film a tiny measure of suspense…
Director Nigel ‘Calendar Girls’ Cole obviously thinks he’s making a ‘When Harry Met Sally’ update, but he’s miles off target.
You know you’re not enjoying a film if the highlight is when your friend Mim accidentally flicks her ice cream spoon across the cinema and it’s more amusing than anything you’ve seen on screen… (She didn’t like the film either in case you were wondering).
Still, here’s a quick plot overview – a boy meets the girl of his dreams, but she is actually an alien killing machine sent to earth to destroy us all. Somehow he develops awesome super powers and battles the sexy alien killer in a series of spectacular scenes the likes of which may never be matched ever again on the big screen… Erm, sorry, that was my daydream, A Lot Like Love is actually about a goofy boy who meets a quirky girl, they get it on, then spend 7 years in different relationships but can’t forget about each other… he starts selling nappies on the internet, she gets engaged but maybe they will end up together anyway? Oh please, a better name for this film would be ‘A Lot Like Tedium’ – remember you don’t have to go and see this – you do have a choice!

Darkmatt Rating: ö (a lot like bollox?)
Reviews of other films and stuff you might want to read indexed here
Posted by Matt Adcock at 10:06 pm

The HUMAN PARADIGM
"...the creative process is a choicemaking process."

Consider:
The missing element in every human 'solution' is an
accurate definition of the creature. The way we define
'human' determines our view of self, others, relationships,
institutions, life, and future. Important? Only the Creator
who made us in His own image is qualified to define us
accurately. Choose wisely...there are results.

Man is earth's Choicemaker. His title describes his
definitive and typifying characteristic. Recall that his
other features are but vehicles of experience intent on
the development of perceptive awareness and the
following acts of decision. Note that the products of
man cannot define him for they are the fruit of the
discerning choice-making process and include the
cognition of self, the utility of experience, the
development of value-measuring systems and language,
and the acculturation of civilization.

The arts and the sciences of man, as with his habits,
customs, and traditions, are the creative harvest of
his perceptive and selective powers. Creativity, the
creative process, is a choice-making process. His
articles, constructs, and commodities, however marvelous
to behold, deserve neither awe nor idolatry, for man, not
his contrivance, is earth's own highest expression of the
creative process.

Man is earth's Choicemaker. The sublime and significant
act of choosing is, itself, the Archimedean fulcrum upon
which man levers and redirects the forces of cause and
effect to an elected level of quality and diversity.
Further, it orients him toward a natural environmental
opportunity, freedom, and bestows earth's title, The
Choicemaker, on his singular and plural brow. selah