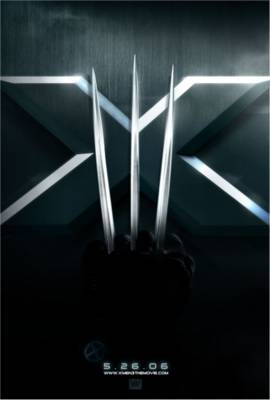 "Is it going to be 3rd time unlucky for Cyclops?"

I love this X Men 3 teaser poster - Wolverine's claws used to perfect effect, and despite Bret 'Rush Hour' Ratner being the new director I'm still looking forward to this next year.

One of the main reasons is that I've read some interesting rumours about plans to kill off one or more of the major characters - and I have to say right away that I LIKE IT when major characters get killed off - it makes me happy (even if I loved the character) to see writers who are prepared to show that anyone can get taken out...

The 'invincible hero' syndrome is fine for long running franchises like James Bond where he's an institution - although imagine how cool it would be if they one day killed him off? But in this world of prequels (Star Wars), resurrections (Elektra) and alternative version remakes that pay no attention to previous films (The Punisher) etc characters are never fully out of the game.

Just wait till you get your hands on the finished DARKMATTERS novel… Major character deaths are guaranteed!!
Posted by Matt Adcock at 8:41 pm

sweet poster, I haven't been the biggest fan of the comic-movies, but the X-Men series has been awesome so far...