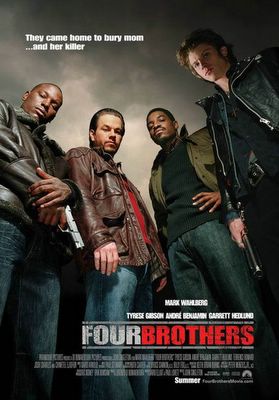 It’s like this: Evelyn Mercer was a veritable saint who worked for Detroit Social Services and helped take hundreds of kids out of foster homes and find them permanent placements. In 30 years, she came across only four delinquents so far gone she couldn't find anyone to take them in. So she took them in herself, taught them right from wrong and sent them out into the world…
Unfortunately for her, she gets gunned to death in the opening scene, so her four little boys decide, like any well balanced, loving sons would - to hunt down and execute every last person responsible.
Can I just say here how much I love a good action movie – especially one that contains scenes of heroic characters battling evil scumbags, preferably with as much large calibre weaponry as they can carry, but I did not love Four Brothers.
In fact this ‘not so fantastic’ four – the Mercer brothers (Mark Wahlberg, André 3000, Tyrese Gibson and Garrett Hedlund) deserve a punishment beating along with director John ‘2 Fast 2 Furious’ Singleton, for wasting two hours viewers’ lives with this mammoth sized turkey.

Four Brothers is bad on so many levels that it’s almost funny but by far the most heinous crime committed here is that dear sweet thug adopting Evelyn Mercer keeps popping up as a ghost. In most films where the characters hold conversations with their departed mothers, we’re talking serious schizoid psychos to a man – but not here. In Four Brothers, dear dead mum jumps out when you least expect it – like at the brothers’ Thanksgiving dinner and says meaningful things like “don’t you be eating with your mouth full.” It really gave me the willies.

Anyway, there is one decent scene about halfway through (from which most of the misleadingly exciting trailer is taken) where evil scumbags in hockey masks lay siege to the brothers’ house with large calibre weaponry. But unless you’re lucky enough to wander in just as this starts and leave again as soon as it’s over – you’re in for a joyless movie experience which you can easily avoid by going to see ‘A History of Violence’ or ‘Serenity’ (next week’s review) instead.

Darkmatt Rating: ö (weak, and unforgivably tedious)
Reviews of other films and stuff you might want to read indexed here 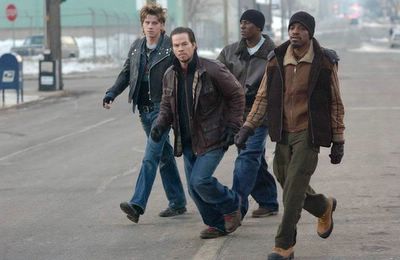 "sensing what a pile of crap the film was turning out to be...
Wahlberg tried to make a break for it under the watchful eye of his 'brothers' "
Posted by Matt Adcock at 9:40 pm