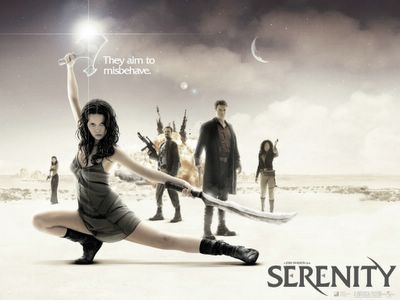 
“Your attention please, this is the Captain.

We seem to have a slight problem with our entry sequence, so we may experience some turbulence and then...

explode.”
Strap yourself in for some serious adventure, because that is the sort of announcement you’ll get if you travel aboard the starship Serenity. The good news is that “explode” is an accurate choice of words, if you mean explode with the year’s best sci fi action, wicked special effects and the movie script of the year…
You know you’re on to a good thing when you see a film that makes you laugh out loud, hold your breath and almost fall off the edge of your seat with excitement all in quick succession. I’m delighted to report that Serenity delivers all this and more. Conceived from the embers of a short-lived (but highly amusing) sci fi TV series ‘Firefly’, Serenity is the first big screen outing for Joss ‘Buffy The Vampire Slayer’ Whedon. And he seems immediately at home – Serenity is an assured crowd pleasing, rip roaring adventure which sees the highly likeable crew of the titular spaceship getting caught up in a galaxy wide manhunt. It doesn’t matter either if you’re a fan of Firefly or a newcomer, prepare to be blown away, Serenity just blasts along like a turbo charged roller coaster, hitting every pleasure receptor on the way.
The characters are a classic bunch – Capt. Malcolm Reynolds (Nathan Fillion) an old school scoundrel with an honest heart, there’s Zoë the warrior, ‘Wash’ the pilot, and personal favourite Adam Baldwin as ‘The Man They Call Jayne’, to name but a few. The script really is crammed with the witty banter that Whedon is famous for, and each character is given their chance to shine. E.g. Wash tells Reynolds that their landing is going to be “interesting.” The Capt. says “Define ‘interesting’", to which Wash replies without missing a beat: “We're all gonna die?”
And another plus point is the way that the CGI effects are used sparingly, often to impressive effect as opposed to certain other sci fi epics that have gone over to the dark side of CGI overdose.
So the smart thing to do would be to go see Serenity at your earliest convenience, rare gems like this don’t come along very often. Then go buy the Firefly DVD box set and catch up on what happened in the run up to this excellent finale…

Darkmatt Rating: ööööö (you can't take the sky from me!!) 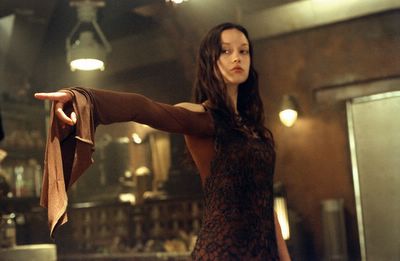 Hi Matt,
I just thought I’d just drop a line to say I love your blog. Movies+Games Wow!!! The perfect combination. I'm definitely going to bookmark you! By the way, I am Neil. Check out my blog whenever you have the time.

Matt you gotta try this software called Qumana. It will help you post pictures on your blog in half the time. You can also drag-and-drop pieces of text and pictures while surfing and edit on the fly. It also has Technorati tags, which increase your visibility in a web search. You could download it from http://qumana.com/download.html it’s totally free!

I had no idea that some of these movies even existed or sequels were on the way. Matt hats off to you, you are doing a real good job. Please do email me at neilk@netscribes.com and let me know what you think about the software, whenever you have the time.

hey Matt, I saw Serenity last night.. Thought it was great and surely this has to be start of a new series of films..

I would have liked to see some more River action, but there is a danger it would have been there for the sake of it. The action sequences were great and she most definitly is tasty in a fight. Great stuff and yet again more great coverage DarkMatt..

Keep it up.. And the writing..