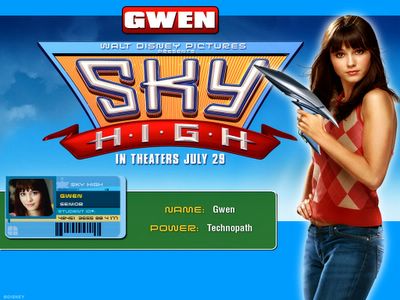 It can be tough being the son of someone amazing, you know, a lot to live up and all that, but tougher still if that person happens to be the greatest superhero on the planet… But such is the lot of Will Stronghold (Michael Angarano), who finds himself just a normal kid, despite having the world saving ‘Commander’ (Kurt Russell) as his dad and equally super ‘Jetstream’ (Kelly Preston) for mum. All he can do is watch on TV as his parents save the city by tackling 60ft killer robots and he notes “all I see is my dad wearing tights in public!”
We get to see young Will starting Sky High – which as the name suggests is the flying school in the clouds for super heroes – kind of like the Xmen academy but for younger kids. This being a Disney flick it is choc full of fun and easy on anything too unpleasant but it works an absolute treat!

You will ‘marvel’ (no comic book pun intended) at the high jinks teenagers can get up to with the aid of flight, super speed or the ability to throw fireballs from their hands. You’ll feel for wannabe hero Will as he struggles to come to terms with being put in the ‘sidekick’ stream as opposed to ‘hero’ classes. As a parent too, I found myself smiling as The Commander is told by Jetstream; “We can't change who he is... not without dropping him in a vat of toxic waste.” He pauses and then replies: “Where would we even find a vat of...” before being cut off.
Yes acceptance issues are the moral theme on offer here but it’s all wrapped up in one exciting package, which my two boys lapped up with glee.

For older viewers you’ll probably recognise the ’best friend girl who is really in love with the hero who can’t see it’ plot as being lifted straight out of many a John Hughes film from the ‘80s but this new super spin on it is still a winner. Other nice touches include a cameo by the original Wonder Woman (Lynda Carter) and fanboy favourite Bruce Campbell as ‘Sonic Boom’ or ‘Gym Instructor Man’ as the Commander calls him.
So if you’re a superhero fan or just looking for a family friendly cinema treat, you could do much worse than taking a trip to Sky High. 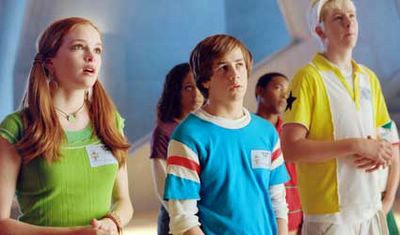 "Even 'sidekicks' can get cute girlfriends in the movies"
Posted by Matt Adcock at 3:18 pm