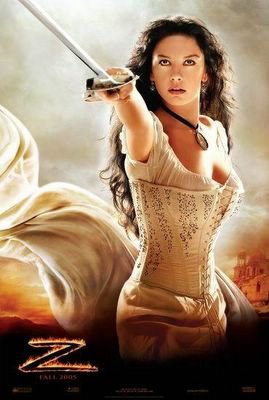 The Legend of Zorro (PG) vs. Wallace & Gromit in The Curse of the Were-Rabbit (U)
Dir. Martin Campbell / Dir. Nick Park
Reviewed by Matt, Gail, Luke and James Adcock

Who is that masked man of mystery, righter of wrongs, champion of the downtrodden and lover of erm, cheese? It’s the legend of oh, wait just a moment - what’s that dog doing to that rabbit with that madcap invention and who was that swordsman leaping his horse onto a moving train, something isn’t right here I think I’m getting my films muddled.
Yes there are currently several family focussed feature films showing at a cinema near you and one of them is a work of utter claymation genius, the other is a ‘by the numbers’ sequel that looks a bit past its sell by date.
Luke help me out here. “Well dad, the Wallace & Gromit film is really funny, but it is also an exciting adventure!”
“And don’t forget the Were-Rabbit,” (chips in younger brother James), “he was a big vegetable munching menace.”
“It did go down a treat with the children, but I found it really funny too,” my lovely wife Gail tells me (family film reviewing eh?). Anyway, Nick Park, the force behind the animated team of Wallace & Gromit, has delivered something very special and if you have a single funny bone in your body – and haven’t already ventured out in search of the fabled Were-Rabbit, I’d highly recommend that you do - as soon as you can.

Wallace & Gromit in The Curse of the Were-Rabbit - Darkmatt Rating: öööö (probably the most you'll ever have with plasticine)

But what about The Legend of Zorro? Well, it’s never a good sign when a film goes through lots of title changes. This one was originally going to be called "The Mask Of Zorro 2" and then "Zorro Unmasked". When the script was changed, the title went to "Zorro 2" then to "The Return Of Zorro" but it ended up as "Legend Of Zorro". I think I would have gone with the “Legend of ZZZZZoro” because despite the return of the swashbuckling Alejandro de la Vega (Antonio Banderas) and his wife Elena (Catherine Zeta-Jones), ‘Legend’ is just a bit dull. If they are planning on making the Zorro films into a trilogy, I can see the next part being called “The Pension of Zorro” because Banderas is unfortunately just not the powerhouse of sword swinging danger he was eight years ago. A couple of half decent action scenes doesn’t make this a ‘must see’, especially as there are some big hitting films coming soon. Look out next week for my advance review of the adventures of certain young Mr Potter for starters. 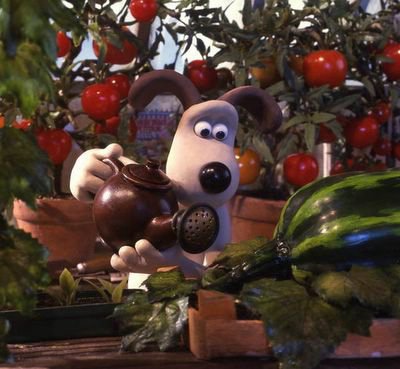 "Gromit's special brew goes down well on the vegetables"

Thanx Matt!
Swap links? "Darkmatters" is good for u?