Harry Potter and the Order of the Phoenix - PS3 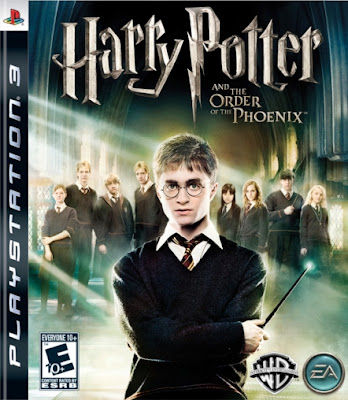 Harry Potter and the Order of the Phoenix - PS3

Dark and dangerous times lie ahead, especially if you own a magical PS3 because just as Harry Potter and the Order of the Phoenix bursts into cinemas, Harry handily makes his PS3 debut.
But can the boy wizard conjure up a spellbinding next generation experience or are we destined to put this on the shelf of ‘games who must not be named – because their so useless’?

So Harry is now a 5th Year and is faced with a new set of challenges - teen angst, trying to look cool in front of girls and a spiteful new Defence Against the Dark Arts teacher intent on making his life a misery. Plus there’s still the evil Lord Voldemort who is growing more resurgent with every passing book.

Order of the Phoenix expands the action in places to let you control not just Harry in his main task of recruiting fellow students to become “Dumbledore’s Army.” This guerrilla group of magical freedom fighters need to be taught some butt kicking spells in order to defend themselves against the Dark Arts – ready for the upcoming wizard war (read the last book to see how that’s going to turn out…).
Other playable characters include Fred and George Weasley in a madcap flying episode, Sirius Black in a confrontation with demented Death Eaters Bellatrix Lestrange and Lucius Malfoy and perhaps best of all, the chance to step up and become Dumbledore for a one on one bout of magical smack down with Voldemort at the climax.

Yes there’s mission specific quests a plenty but what sets Order of the Phoenix apart from all previous Harry Potter games is the freedom to simply explore and enjoy the wonderful digital playground of Hogwarts itself which is massive and packed with magical secrets to fund and rewards to unlock. Interaction has been stepped up with virtually everything you come across able to be affected by your arsenal of spells. And because there’s no timer ticking down or hard locked main mission you are free to enjoy the many alternative tasks, games and discovery challenges at your leisure. For hardcore Harry Potter fans this is gaming nirvana – for casual players this accessible ‘sandbox’ approach should put Order of the Phoenix on your radar even if you don’t know your muggles from your quidditch pitches.

Control is nicely mapped to the SixAxis which can be used as a Wii like motion sensitive ‘wand’ for casting spells. In fact the gesture-based spell casting system soon becomes second nature even if you choose the more traditional right analogue stick method of control.

Graphically Order of the Phoenix is incredible on the PS3, the characters have all the traits of the film actors and Hogwarts is a thing of beauty. Hats off to the production team for sense of wonder that will hit you as you stumble across some previously missed area – only to pause and take in the glorious architecture or blazing sunlight filtering through the ancient windows.

If there are any issues to be had with Order of the Phoenix, it has to be said that the voice tracks can begin to get on your nerves (especially Hermione as she nags you to do something or other) but even this adds to the authenticity so is only a small hiccup in what is otherwise a pretty flawless execution of Potter’s world.

There are some wicked little mini games to be found too including gobstones - a kind of marbles sim, exploding snap which tests you hand eye reactions and best of all – Wizard Chess which is addictive in itself.

Harry Potter and the Order of the Phoenix is a classy addition to the PS3 software catalogue and shows that film tie ins, if made with enough love and effort, don’t have to be mindless cash ins. There are hours of fun to be had here filling your Room of Rewards, and if you’ve seen the film and read the book, playing the game should be high on your ‘things to do’ list!

Link to my review: http://darkmatt.blogspot.com/2007/07/harry-potter-and-order-of-phoenix.html