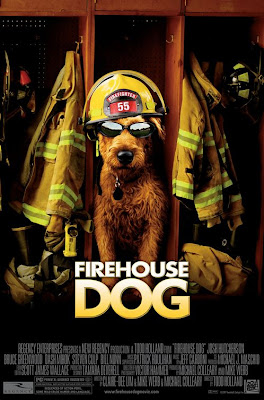 Advice to follow on discovering that Firehouse Dog is on at a cinema near you:

1.Raise the alarm by locating the nearest 10 year old and shouting ‘FIREHOUSE DOG’ at them…

2. Call the cinema and find out the show times, this will let them know that you are on the case.

3. Do not take any personal risk. You may attempt to extinguish the will to go and see this film by using suitable distraction equipment (PlayStation 3’s are particularly good because it has wireless controllers and will not present a trip hazard for your escape route – should you find yourself irresistibly drawn to the cinema).

4.If you do find yourself witnessing Firehouse Dog, leave the cinema after the showing in the proper evacuation procedure…

Yes, Firehouse Dog is exactly what you’d expect – a family friendly ‘cute dog helps kid with issues’ schmaltz fest which is sure to ring the bells of dog and Firemen lovers everywhere.
So it must suck then yes?
Well, I really thought it was going to when I agreed to take my 10-year-old son to see this, but now I have to report to you that Firehouse Dog isn’t actually that bad. No, it isn’t going to win any Oscars or make anyone’s ‘top 10 films of the year list’, what it does though is deliver mildly amusing and generally positive entertainment.

Lonely and disenchanted young Shane (Josh Hutcherson) finds Rexxx – a loveable Irish terrier who he thinks is a run of the mill lost dog but who is a hotshot doggie film star / stunt dog. You might have seen him in The Fast And The Furriest and Jurassic Bark!? Anyway, Shane’s dad (a decent turn from Bruce ‘Déjà vu’ Greenwood) is a down on his luck Fire Chief who leads a gutsy but useless team of firemen known as Doghouse… You probably won’t be surprised to know that Rexxx is soon adopted as the new Doghouse mascot but can he really help Shane save the city against a rampant arsonist too?

Firehouse Dog is a fair enough child-pleasing flick, hard to fully recommend but equally hard to dislike too much either, packed as it is with plenty of preteen angst and some genuinely funny / action moments. However I’d only urge you seek this if you’re physically adverse to transforming robots or The Simpson’s, both of which are hitting the big screens in the UK this week!?