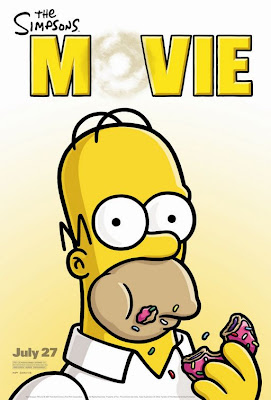 It’s been a long time coming and anticipation is high for the big screen debut of Springfield’s finest yellow family…The writers have had years in which to distil the very essence of all things Simpson, polish up their best jokes and whip up a scenario which will take us into unexplored territory – beyond the 30 min TV show timeframe…
Blasting off with possibly the best Itchy and Scratchy episode ever, The Simpsons Movie hits the ground running at a breathless pace. Quality laugh out loud jokes come thick and fast – it’s great stuff and you won’t want to blink for missing a visual gag or reference. The first half an hour is without doubt the best Simpsons antics I’ve witnessed.
There’s no shortage of drama either as President Arnold Schwarzenegger authorises unthinkable action to be taken against the residents of Springfield – thanks to the selfish stupidity of just one man… I won’t spoil the plot for you as there is precious little of it, this is really Homer’s odyssey. Witnessing the trials and tribulations of the bald yellow one, which sees the fabric of the Simpsons family stretched to breaking point is something quite wonderful. The longer running time however does mean that the joke ratio seriously drops off in the second half but if you’ve ever had love for the citizens of Springfield, you’ll still savour each moment.
The iconic artwork and characters look great on the big screen. Animation wise it mostly keeps the TV show’s 2D style but mixes in some impressive 3D computer generated scenes that make for real cinematic spectacle.
You’ll certainly see things that would never have made it into the television version - that’s what makes this a gold plated ‘must see’ movie and easily the funniest film of the year so far!
Most characters get a brief moment of focus, but it this is at heart the story of father / son bonding set against an apocalyptic vision peppered with cameos and even a new scene stealing superhero… Is it a bird? Is it a plane? No it’s um, ‘Spider-Pig’!!
Yes, altogether now: ‘Spider-Pig, Spider-Pig - does whatever a Spider-Pig does. Can he swing, from a web? No he can't, he’s just pig - look out! He’s the Spider-Pig!’
Run, don’t walk to check out this pure yellow class A entertainment – D’oh-nt miss it!! 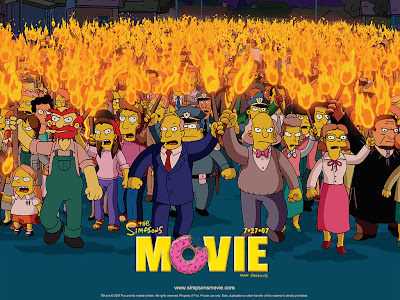 "the mob closed in on Nikolai and his less positive review (http://bina007.blogspot.com/2007/07/simpsons-movie.html)"

Simpsons are the best ! I love them! And I also love to watch these the most romantic movies!