Harry Potter and the Order of the Phoenix - review 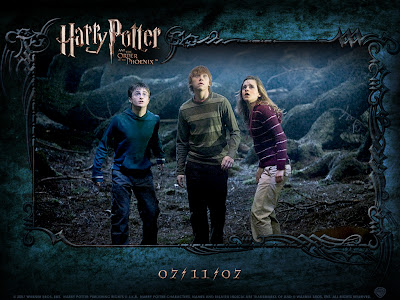 Harry Potter and the Order of the Phoenix (12a)


Official Notice from the Ministry of Magic – authorised by Professor Dolores Umbridge.

Listen muggles, it has come to the attention of the Ministry of Magic that there is a dangerous new film being distributed – it is entitled Harry Potter and the Order of the Phoenix… The film depicts many things that we at the ministry are most concerned about and most worrying of all; it seems to indicate that the evidence of the Dark Lord's return is incontrovertible.

What bothers me most personally is how I am portrayed in the movie by Imelda Staunton as a meddling duplicitous kill joy – constantly trying to hinder the true hearted Harry Potter and his misguided friends who have allied with that old fool Dumbledore.

"Things at Hogwarts are worse than thought"

Other concerning elements in this undeniably powerful and admittedly exciting tale, include high jinks by those darned Weasley kids, detailed depiction of Hogwarts school rules being broken and an overt scene of teenage Harry having his first kiss – what is the world coming to?

Then there’s the breathtaking climactic battle which is something else altogether! They actually show Voldermort and his Death Eaters facing off against Harry, his meddlesome school friends (who call themselves Dumbledore’s Army) and the do gooding Order of the Phoenix. Don’t be fooled by the amazing special effects, the valiant stand by the heroes in the face of certain doom or the spellbinding edge of the seat action, this is deviant propaganda…

"pucker up and say 'Mmmmmmpphhhh' "

One thing that I can commend is how the Director - David ‘they have so much faith in me that I’m also directing Harry Potter and the Half Blood-Prince’ Yates keeps the dark sense of foreboding that has been building throughout the films and the books.

Yes on balance I can see how Harry Potter and the Order of the Phoenix may well catch up many in its ‘spell’. Some will no doubt say that this is the film where the Harry Potter franchise steps up and delivers fantasy action and adventure on a previously unprecedented scale.

In fact all the actors certainly appear to be having a fantastic time especially the newcomers to the series like Helena Bonham Carter as the unbalanced Bellatrix Lestrange and Evanna Lynch as the loopy Luna Lovegood. Harry and his mystical pals seem to be right at home in their well-worn roles too (see the Matt Adcock’s interview with them if you want to get the low down).

Remember, the Ministry of Magic has certified this film as being ‘too spine-tinglingly fun for muggle consumption’ watch at your own peril!!

Out of 5 you have to go with a magical 5 (yes Potter shots and scores with his best film yet!)...

"look at that poise, that style, that vicious little minded woman!!"