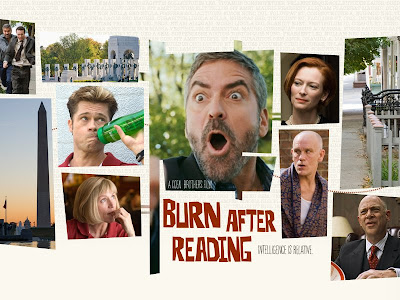 This is a highly classified review. So secret and sensitive is the following material that I advise you to ‘Burn After Reading’ – which may be problematic is reading this online... The report on the Coen brothers' latest cinematic experience crucially indicates the potential full-scale incompetence of non other than the CIA.

The first subject under investigation is CIA analyst Osborne Cox (John Malkovich), who quits his job after being sidelined – once his drinking problem is mentioned. He’s come back to his superior is however is typical of Coen brother sublimeness: “You're a Mormon. Compared to you we all have a drinking problem.”

The second subject is gym worker Linda (Frances McDormand), a lovelorn single who dreams of elective surgery to give her a better chance of finding Mr Right. She and dim co-worker Chad (Brad Pitt), stumble upon Cox’s memoirs on a disc and hatch an ill-fated blackmail scam.

Also in this tangled web is womanising wide boy Harry (George Clooney), who carries a big gun, works for the Treasury Department and is having a sordid affair with Cox's wife Katie (Tilda Swinton).

Things get rapidly out of hand with multiple path crosses, double crosses and much profanity backed up by some genuinely hilarious screwball comedy. This isn’t anything like the awesome gritty thrills of the Coen’s No Country for Old Men, Burn After Reading this is much more like a mix between their genius Big Lebowski and much-maligned Ladykillers. The result is uneven and veers from laugh out loud moments to mild bewilderment but overall it’s a film worth seeing as long as you’re not adverse to sporadic acts of violence.

Everyone in Burn After Reading seems to be having a real hoot putting this together and the sense of madcap fun is infectious. You just can’t help but get caught up in the maverick glee streaming from the screen – never more so than when CIA superiors (David Rasche and J.K. Simmons) try to make sense of what is being reported back to them about the whole muddled affair.

Which is summed up:

“So what did we learn from this?”

“Report back to me when it makes sense!” 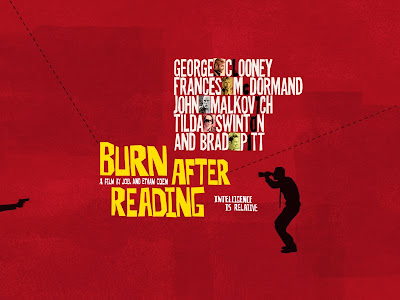 Endorphin Stimulation: ööööööö (7)
+ Muddled plot takes a bit of keeping up with

Tasty Action: öööööö (6)
+ Some but only sparodic action

Gratuitous Babeness: ööööö (5)
+ Nothing to get steamed up about here

Comedic Value: öööööööö (8)
+ Some classic funnies in here and Pitt is hilarious

Liable to make you:
"join a gym rather than the CIA"

End note:
Fans of Coen brothers comedies won’t have too long to wait for their next hit as A Serious Man, which will be a black comedy about a professor named Larry whose life unravels when his wife prepares to leave him.
Posted by Matt Adcock at 4:12 pm