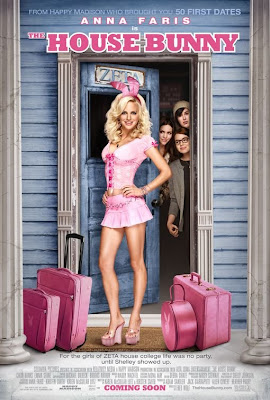 Here’s the year’s contender for ‘most gratuitous but joyous overuse of hot pants in a movie.’ The House Bunny is pretty much a retread of many US college comedies from Animal House to Mean Girls – just with added scantily clad Playboy dumb-blondeness. It’s a one-joke flick that seems to give the message that in order to succeed in life as a woman, all you need to do is be sexy and show a lot of skin.
So we have hot Playboy playmate Shelley (Anna ‘all four Scary Movies’ Faris) whose ambition in life extends only to be a centrefold in the infamous magazine. But her kit off dream is rudely taken from her when after turning 27 (which they say is 59 in ‘Bunny Years’) she is forced to vacate Hef's sexpot mansion. Homeless and clueless in equal measure – Shelley is reluctantly taken in by a desperate bunch of nerdy college misfit females who face eviction from their sorority house for not being able to recruit enough ‘pledges’. Can the Bunnygirl sex up the minging weirdos of Zeta House who include the actually cute but made to look rough Natalie (Emma ‘Superbad’ Stone) and man hating Mona (Kat ‘Charlie Bartlett’ Dennings)? Also in the party of unfortunately socially challenged college girls are full body brace wearing Joanne (Rumer ‘daughter of Bruce’ Willis) and pregnant Harmony (American Idol contestant Katherine McPhee who gets to ruin the end credits with a rubbish song). 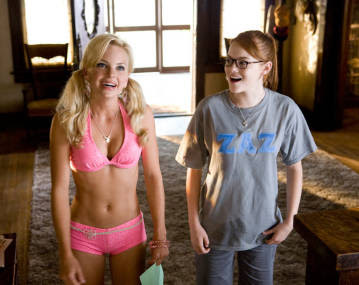 "which look do you prefer?"
Faris shows a genuine talent for good natured comedy, delivering semi risqué material with an innocent Goldie Hawn vibe backed up by a killer Farrah Fawcett like figure which gets shot from every conceivable angle in eye watering close up. Along the predictable path to saving the day, Shelley also has time to try and woo old folks home manager Oliver (Colin ‘yes my dad is Tom’ Hanks). Then of course in true Revenge of the Nerds style there is the nasty middle class rival house fronted by a preppie sweater-wearing bitch.
But is The House Bunny for you? That depends entirely on your tolerance for sweet-natured sexiness, women in skimpy outfits and dippy college comedy bonding, complete with pratfalls and the occasional actually rather wry observation. It’s mostly a stupid, vapid, sexist money-spinner but try as I might to find serious fault with this, I found it hard and came out smiling having been amused. 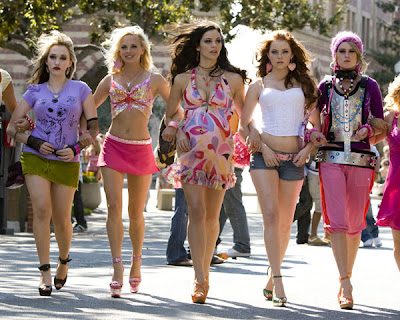 "the House Bunnies take to the street..."

Endorphin Stimulation: ööööö (5)
+ No braincells were hurt in the making of this movie

Comedic Value: ööööööö (7)
+ Should make you laugh out loud a couple of times

Arbitrary final rating: öööööö (6)
Far better than you might expect

Liable to make you:
"appreciate Playboy Bunnies as humans with feelings...

it is a retelling of snow white and the seven dwarfs and the wicked stepmohter--get it?
dan murray--faithful reader