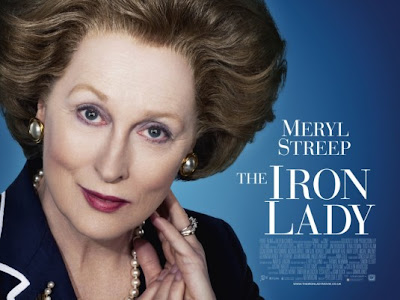 This isn’t actually an ambitious sequel to animated sci-fi flick The Iron Giant, no this is an equally far fetched tale of how a female life form somehow assimilated the position of utmost political power in the UK.

Yes, whatever your political alliance, the name ‘Margaret Thatcher’ will undoubtedly resonate deep feelings within anyone who lived through her reign of terror from 4 May 1979 – 28 November 1990. Played incredibly here by Meryl Streep – who must surely by up for serious award nominations for this role – the film depicts the titular ‘Iron Lady’ in her confused and unstable elderly years. As she struggles to come to terms with the loss of her husband Denis (Jim Broadbent), with whom she still talks and interacts even though he’s no more than a figment of her imagination. This gives the filmmakers the plot device to run through a highlight reel of Thatcher’s ‘greatest hits’ – jumping between the high profile elements of her time in power including the miners strike, the Falklands war and the poll tax riots.

The most interesting areas are the quick dip into the early years of how young Margaret managed to blast her way through the many barriers of gender and class to make her way into the male-dominated world. The film is also touching in the love story of her and Denis and the price she had to pay for her single minded pursuit of power. 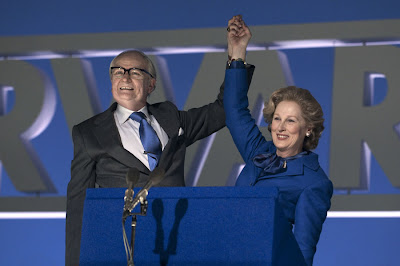 Unfortunately, the overall film is lumpy, schmaltzy and liable to test your viewing endurance even with Streep’s powerhouse performance. Yes Thatcher is and was an extraordinary and complex woman but The Iron Lady leads viewers very firmly (and mostly overly sympathetically) through her career.

Supporting cast such as Olivia Colman, who plays Maggie’s daughter Carol do well with their limited screen time and the special effects that bring about the aging process as scarily effective (possibly overly so as there are not many people who want to spend cash to stare at strange wrinkled synthetic elderly make up effects for almost two hours).

The Iron Lady really might be Streep’s finest-ever performance, but it unfortunately just isn’t enough to make up for the pedestrian filmmaking and propaganda-ish spoon-feeding of very selected highlights.

Tory boys and their ladies may lap up the blue rinse flashbacks with a “rah rah” and a wave of their ‘I heart Maggie’ flags. Fans of quality films however are likely to be unconvinced and unimpressed by this docile effort – Streep’s performance deserves to be in a much better film!

Laughs öö – not meant to be funny but sometimes it is

Horror öö – if wrinkles freak you out then be afraid

"The Iron Lady" is not the movie you expect it to be, nor is the movie you want it to be. That in it's self is not necessarily a bad thing, the reason that this is a bad movie is because what it is isn't very good. This is perhaps the least focused, least interesting biopic in a great many years. Considering it's fascinating subject, weather you agree politically or not, you've got to admit Marget Thatcher is an interesting woman and historical figure. What we get instead is a banal Lifetimeish movie of the week, a tear jerker, if you will, that no one cries over.

"The Iron Lady" gives no insight into Mrs. Thatcher, little or no historical references, little in way of her personal life. Instead, the film seems focused on her weening years as she enters dementia and caries on conversations with her deceased husband. The unfocused script barely touched on issues of politics, how her gender affected her place in parliament or much of her personal sacrifices, that she must have made when ascending to the highest office in the land. This is the kind of vague biography where the subject is kept continuously at arms length. I have read that those who support this movie claim that it is well made, I disagree, it may look professionally made, but the film is undermined by flashbacks, edits and montages that keep the viewer disorientated.