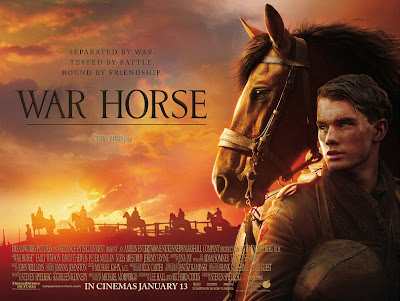 Hello horse fans, you join us for the first marathon World War One big screen steeplechase - the going is good to firm but bogged down with far too many soggy areas…

Soft-hearted billionaire director Spielberg turns this children’s novel / hit play into a long-winded film and leisurely crafts a lavish but oddly pedestrian ode to possibly the bravest equine beastie ever.

Spielberg's film are mostly viewed as cinematic phenomena but War Horse is a bit of a hard sell after it has been worked up with plenty of sentimentality by the likes of Richard ‘Four Weddings’ Curtis. Yes the cinematography is gorgeous and there are a couple of exciting scenes including a stunning Calvary charge thanks to the WWI setting but my son (who’d read the book and was keen to see the film) actually fell asleep about half way through!? 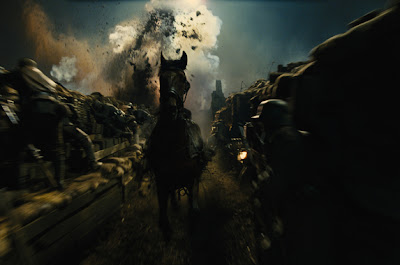 So why is War Horse slightly lame rather than the epic thoroughbred it could (should?) have been? It’s certainly not the fault of the lead horse ‘Joey’ – you’d be hard pressed to find a nobler looking or engaging horse – if they gave Oscars to animals he’s be a dead cert to bag it... Nor really can the blame for the dramatic flatness be totally shouldered by the competent cast. What is missing here is the ability of the film to actually connect and make you care more than mildly about anything you’re witnessing.

Joey’s odyssey from humble farm beginnings through to messianic wartime icon certainly had the potential to send shivers down the viewers spines and grab their imaginations, so it’s hard to explain quite why the overall reaction isn’t better. I found the best scene to be the no-man's-land sequence where a British and a German soldier work together to free Joey from his barbed wire / near death predicament. It really stands out because it feels less ‘forced’ than the most of the other scenes. Eventually the clunky plot limps along to the very Hollywood conclusion, which leaves those audience members who are still awake with a lump in their throats and probably a newfound desire to buy a pony.

This War Horse should have been a cinematic thoroughbred but it falls short in a blub of sentimentality. Overall it’s decent enough but not a classic, maybe Spielberg’s forthcoming Robopocalypse will deliver more? 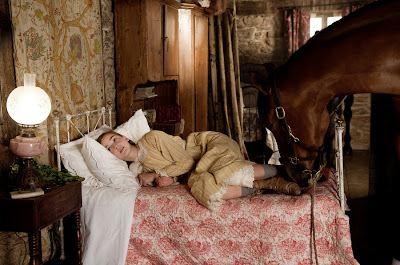 War Horse is an exceptional film. But I do believe that this ToI review has been more generous to it that many Western critics. Although not commercially unsuccessful, this film is clearly not oriented towards non-artistic film goers. But even from an artistic point of view, the war-theme depicted has nothing to offer that other classics like Saving Private Ryan or No Man's Land haven't already done. The only refreshingly new scene in the movie was the (fictional) banter between a German and an English soldier engaged in freeing Joey, when he's stuck in the cross-fire. Fictional or not, Spielberg did manage to bring forth the (animal loving) human being behind the rifle triggers and bayonets, and for that he deserves credit. I loved the movie and so high rate it high. But no harm in expecting greater things from the greatest.