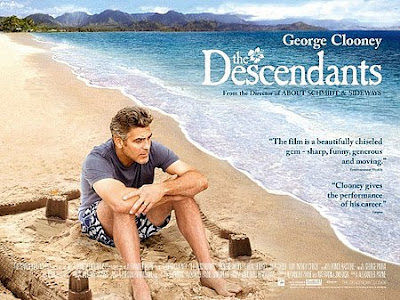 Here’s a thing – how can a wistful film about the infidelity and death of a beloved wife be uplifting and life affirming in the midst of the massive grief, hurt and suffering of the main character? It takes a very special actor to pull of such a role and luckily for The Descendants, George Clooney brings his ‘A’ game and completely nails the lead as Matt King.

The Descendants is a free wheeling family drama set on the idyllic Hawaiian islands – and the scenery plays a key part to the feel of the film. The pacing is leisurely and laid back, which mirrors the pace of life on the islands and as well as Clooney delivering a potentially career best performance, the rest of the cast are great too. 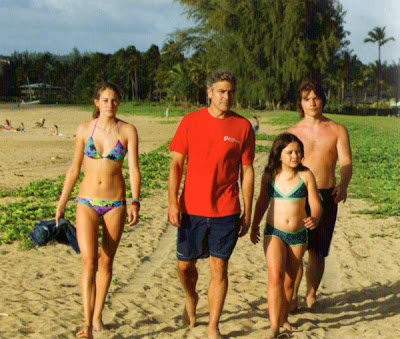 
The plot is anything but feel good – this is an intense trip into the conflicting emotions, as Matt and his two daughters Alexandra (the awesome Shailene Woodley) and Scottie (Amara Miller) have to deal with the loss of their wife/mother. On paper it sounds depressing and a hard slog of a watch, so it is an incredible achievement that Director Alexander Payne has crafted an amazing film that balances the depths of misery with a positive energy of life having to go on.

I haven’t seen bereavement and grief handled so well on the big screen for a long time, the King family is one that you will get to appreciate and root for in their time of crisis – and you’ll feel both drained and moved by the time the end credits roll. A little light entertainment is provided in Alexandra’s nice-but-dim boyfriend Sid (Nick Krause) who is used to great comic effect throughout. 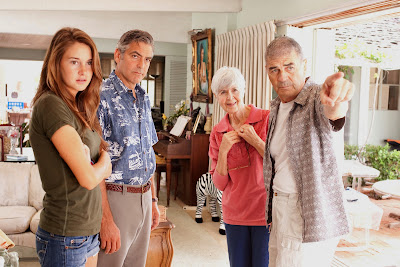 One point though – if you absolutely hate Hawaiian music then The Descendants isn’t the movie for you and it embraces the island soundtrack every bit as much as it relishes in the paradise looks of the place. Clooney's Matt King is a deep character – he shows flaws and regret for all to see and his broken relationships his daughters is as honest and painful as anything committed to screen.

The Descendants takes you to a dark time in the lives of a family already coming apart at the seams, It’s a trip worth taking and one to savour – just don’t expect it to wash over you without your soul being engaged.

Babes ööö – Shailene Woodley is one to watch!