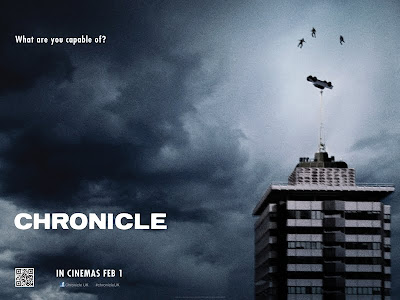 “Telekinesis: The ability to move, lift, vibrate (that's my favourite), spin, bend, break or impact objects through the direct influence of mental power or other non-physical means."

You want to see some ‘direct influence’? Go and see Chronicle, this is a pitch perfect tale of three high school kids who acquire telekinetic superpowers from a strange possibly alien artefact. So what are these young guys going to do with the power to move things, fly and attack people just with their minds?

At first the three lead characters – troubled Andrew (Dane DeHaan), his nice-but-dim cousin Matt (Alex Russell), and slick Steve (Michael B. Jordan) — go out and have fun with their powers. Pranking shoppers, pulling off jaw-dropping talent show routines, checking out girls’ underwear, playing football in the clouds (a truly grin inducing sequence) – you know, just the average lads kind of stuff. But before you can say ‘with great power comes great responsibility’ at least one of the group is exploring his dark side which sets up the most thrilling super-heroic battle climax to grace the big screen in years. 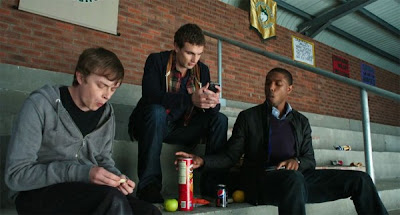 Chronicle is a great film, it deconstructs the standard super hero genre in a similar way to the excellent Kick Ass or Super did and manages to play it both for laughs and packs a darker undercurrent. My teenage son loved it and proclaimed it to be ‘awesome’ which is high praise for a relatively low ($15m) budget film.

Some might not like the idea of Chronicle being a ‘found footage’ flick – most of the shots are taken from the hand held camera Andrew carries around with him. It works though and adds a fun element of effectively capturing the changing moods of the characters. First time director Trank uses the hand held cinematic device to good effect, especially when Andrew causes the camera to float using his powers. There is also some social commentary on the very reasons people choose to record what they do. 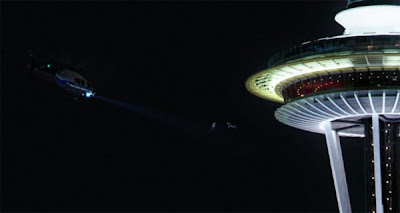 Chronicle is a refreshing blast of teen angst channelled through super-powered urban destruction – this is a ‘must see’ film for anyone who enjoys superhero flicks and it even leaves the door open for what would be a welcome follow up. 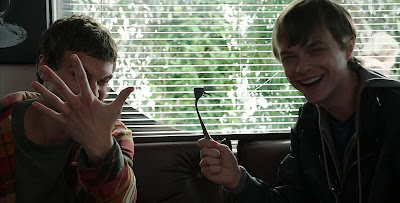 Chronicle will rock you and leave you breathless – highly recommended viewing.

Laughs ööö – laugh out loud in places (boys will be boys)

Horror ööö – grim moments for a 12