Darkmatters Review: The Woman In Black 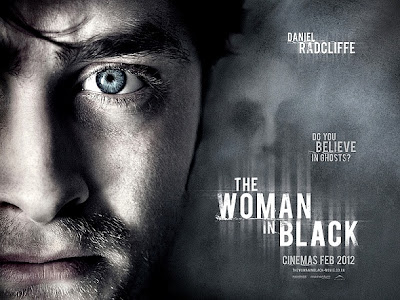 Beware young Harry Potter fans – the boy who lived now finds himself in much darker territory… Daniel Radcliffe does his best ‘grown up’ face starring as noobie lawyer Arthur Kripps. His life has not been a happy one - his wife died in childbirth and his son is prone to doing sad drawings of them, but things can only pick up right?

Things don’t pick up, in fact they get very creepy and generally a bit grim when Kripps is dispatched to a remote northern village to sort out the paperwork of a deceased widow who has left a huge gothic mansion… The locals aren’t a friendly bunch – as it seems they are haunted by a spectral ghostly ‘Woman in Black’ has been appearing. This woman shaped ghoul is an omen of doom and when she is seen a child dies in the village…

"The Jehovah's Witness got cross at not being let in"

Director James ‘Eden Lake’ Watkins goes for the tried and tested ‘jump scene every 8 minutes’ formula with his adaptation of Susan Hill's best selling horror mystery novel. You really can set your watch by the ‘BOO’ moments as every opportunity to have ghostly images appear in the corner of shot, in mirrors, through grimy windows etc are taken. It’s certainly a decent effort at making you jump, wince and think ‘come on Harry – can’t you just use a spell to sort out this malicious old hag’. The film also walks a fine line of keeping within the crowd friendly 12 certificate (the last time The Woman in Black was made in 1989 it worked with a 15 cert).

Radcliffe does OK in the lead role, but most of the time he just has to look a bit mystified and / or scared. The rest of the cast are decent enough too and the special effects work well. The main ‘haunted house’ is a masterpiece of spook-em-up design and comes with the most sinister selection of evil looking toys ever to be assembled in one place.

Yes The Woman in Black is absolutely chock full of horror movie genre clichés but they are thrown at the screen with such force that you can happily suspend your disbelief and lap up the screaming banshee wails, the terrified yelps and the whimpering that will be coming at you in ‘surround sound’ – mostly from the various young Harry Potter fans who have never witnessed a real horror movie before!?

3 – Darkness and creepiness by the book

Spiritual Enlightenment öö – some spirits are not to be trusted!?
Posted by Matt Adcock at 8:46 pm