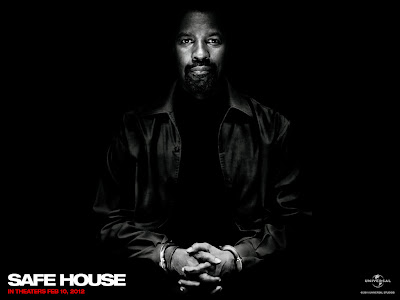 ‘When they tell you “You've done a fine job, Son. We'll take it from here.” That's when you know you're screwed.’

Step up for a high-energy espionage action thriller from director Daniel ‘Tony Scott wannabe’ Espinosa. Safe House sees Denzel Washington star as Tobin Frost - a notorious C.I.A. super spy who went rogue and has been messing things up for the international intelligence community ever since. Frost has got himself mixed up with a lot of very nasty people who want him dead and so turns himself in after being cornered by an army of hit men.

Matt Weston (Ryan Reynolds), is a young C.I.A. "housekeeper" – frustrated at being paid to watch a largely unused Safe House and hoping for the change to prove himself worthy of a more exciting position… So when Frost is brought to Weston’s Safe House for a spot of ‘persuasive questioning’ or torture by water-boarding as it turns out – you just know that it won’t be long before Weston will be up to his neck in action. 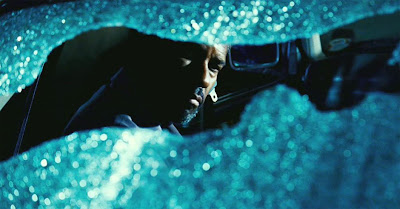 Then everything kicks off as a team of tooled up mercs attack the Safe House killing all the C.I.A. operatives and forcing Weston to go on the run with Frost in his custody. Cue exciting car chases, gun battles and fist fights aplenty interspersed with some frankly dull and slightly unnecessary soppy character development as Weston tries to prevent his beloved girlfriend Ana (the very sexy Nora Arnezeder) from becoming a target for his pursuers.

The action scenes are what really impress here – breakneck paced chases mixed with gritty feeling fights – Safe House is a film that will satisfy those who like their gunfights loud, well staged and where characters actually get hurt / killed.

The film rocks some impressively shot cinematography too, which elevates it from the straight to DVD action efforts starring Steven Seagal etc… Throw into the mix some quality double crossing and paranoia inducing ‘don’t’ trust the system’ messaging and you’ve all the ingredients for a fun action thriller.

Whilst Denzel acts Ryan off the screen (they should have gone for Ryan ‘Drive’ Gosling if they wanted a Ryan who can hold his own) the pair do generate some chemistry and are ably supported by quality actors such as Liam Cunningham, Brendan Gleeson, Rubén Blades and Vera Farmiga.

Safe House might not be a classic but it certainly delivers enough to make it worth seeing on the big screen.

Horror öö – some savage fights but not overly gory